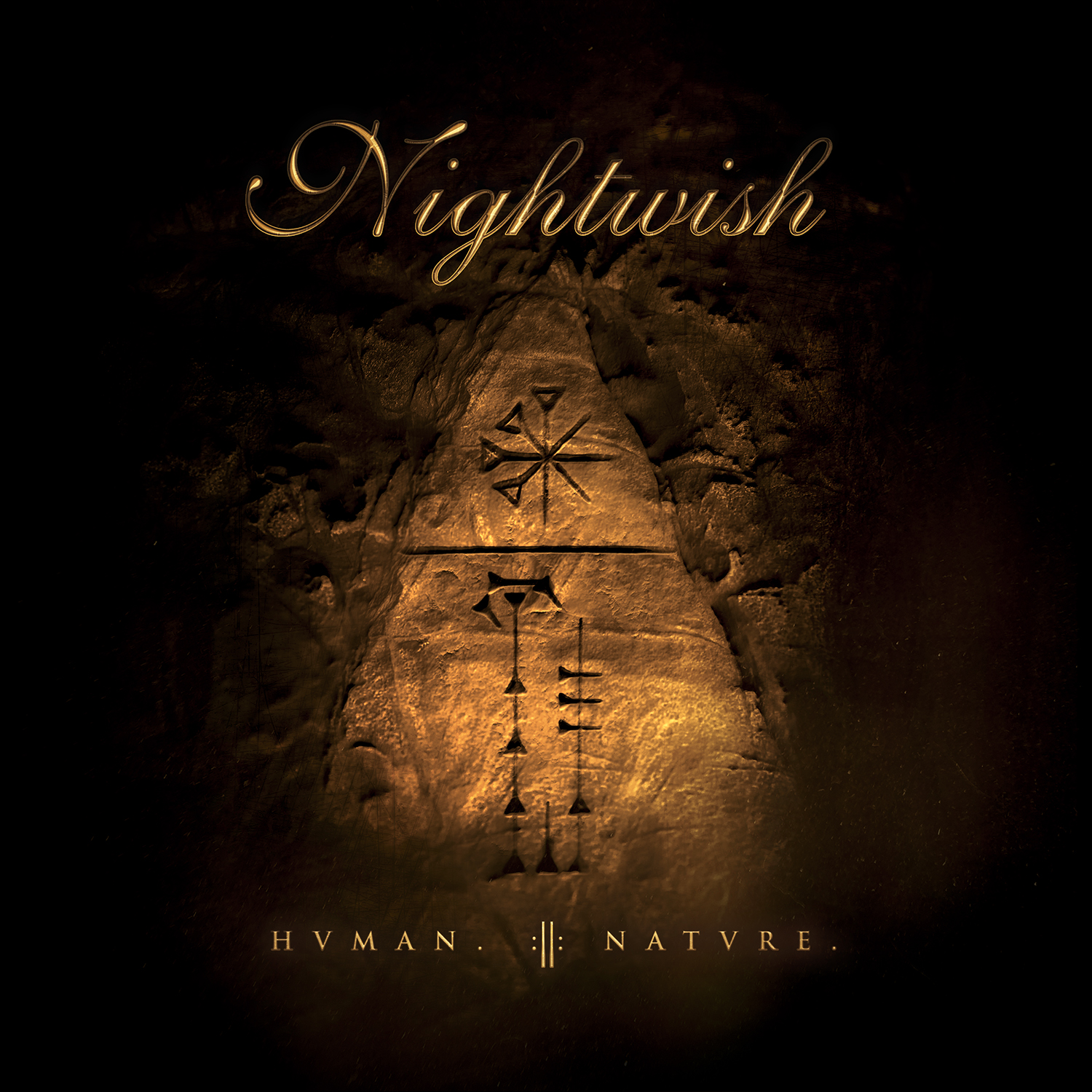 The controversial video release of the band’s new single ,,Noise” was the first hint of a slightly different course set by epic/gothic metal flagship Nightwish. Moving the vessel into a modern direction without discarding their typical style and grace, the release was followed by ,,Harvest” emphasizing Holopainen’s widened vision. With vocals from Troy Donockley the song lifts a tip of the veil for their brand new `Human. :II: Nature’ album, which uses all of the band’s capacities for the first time. Evolving in a more complex manner, Nightwish moves into the 2020’s almost rejuvenated and `Human. :II: Nature’ seems to be only the beginning.

Holopainen and his band push the boundaries of their own being as well as epic metal in general. Consisting of 2 CDs chock full of new music, the band sets sail into the new decade with new élan. An offering with 9 brand new tracks and a CD featuring the instrumental endeavour dubbed `All the Works of Nature which Adorn the World’. Two entirely different experiences executed by a stellar performance designed to underline the thin red line embedded, about humanity and nature, humans versus nature and the wordplay human nature. Though 9 varied tracks with entirely different make up, the conceptual load is keenly embedded into the lyrical content only with returning phases and hint to the existence and the balance between nature and humanity. ,,Noise” already lifted the veil of this new approach and modern lyrical content addressing society and human behaviour, but the way Holopainen twisted this vision into the Nightwish format is impressive. Injecting it without straying from the root of the band only to widen the horizons will appeal to fans of the first hour as well as to those currently on the prowl for new music. The enchanting overtire with its pompous string arrangements opens classical and orchestral slowly building tension towards the enchanting opening which reveals a frail side of Floor Jansen’s impressive range. Angelic almost, light and sugar coated is follows a cinematic pattern before the band goes all in and we hear the first glimpse of the new Nightwish. Pompous like `Imaginaerium’, yet scattering with progressive elements and with Floor switching from falsetto to soprano at times. Her dominance in the track is blissful and varied. The short pointy solo of Emppu adds to the power of the track. Dying out with operatic tendencies the song opens perfectly to the metal video single ,,Noise”, which is a signature song of the album. It packs tremendous progressive power with Kai Hahto at centre stage and Vuorinen’s signature blitz riffing over the dense keys. The ominous flamboyance aligns perfectly with the dark matter of the lyrical content with the song morphing frequently. One of the absolute (personal) highlights is ,,Shoemaker”. The song storms forward with progressive breaks and intense guitar riffs spawned. Jansen’s vocal performance is swirling and staccato leaning on the hook of Emppu’s blunt short riffs. The chorus is captivating and contrasting, with its slick melody detaching from the adjective verse it suddenly transcends into an overpowering piece packed with insane keyboard swirls and a heavily orchestrated melody that unloads with benchmark Nightwish bliss before it unexpectedly shifts shape again and narration takes it to a chanting glorious end. Fulfilling the full vocal potential for the first time we also see Holopainen’s vision represented by the use of all 3 singers in specific tracks and duets, with Donockley adding a versatile role adding the needed poetic posture with accents to the melodic and Celtic tinged new single ,,Harvest”. More transparent and light the opening appears to stray from the overload of orchestration, but Tuomas wouldn’t Tuomas to correct. Moving up and down the primary chords of the organic opening the orchestration increases and indulges the keen melodic variation with clinched cadences and usage of typical string arrangements and Troy’s flute. The melody is affective and cadence will make this a crowd pleaser during the their upcoming tour.

A heavy riffs awakens us from the linger and ,,Pan” shoots into gear. Floor pitches high and the song progresses over restrictive drum and piano interaction before returning to the riff-laden chorus. Breaks and hooks impose an anger-laden tenor upon the listener and the density of orchestration is grim. Floor frequently switches from metal vocals to her soprano range and the song packs insane tension and drama. A pulsating heartbeat takes into ,,How’s the Heart?”. It is perhaps the most melodic tune next to ,,Harvest”. Again a little Celtic tinged underlining the ancient connection of the ancient Celts and their pagan dependence of nature. Another highlight is the serenely opened ,,Procession” perfectly filling the void after ,,How’s the Heart?”. Angelic vocals and smouldering musical interaction make the song flower with sincerity and heart touching frailty. Swirling keys see the addition of all instruments one by one and the song unexpectedly briefly starts to roll forward with melodic stride at the very end. Again Holopainen uses the previous track to paste and outline for the next with ,,Tribal” somehow gelling with the intimacy of its predecessor but contrasting deeply. The heavy drum rolls add to the anger laden bridge that sees Hietala and Jansen kick the bucket. The ravishing riffs that pulls forward and tribal drumrolls take dominance. Towering in power towards the end the tracks harshly ends making way for the eluding magnum opus ,,Endlessness”. Reminiscent to Evergrey the opening sees Vuorinen laying down the opening melody solo before Hietala pitches the track into form duetting with Jansen. Whaling with spiralling melodies the track packs insane drama and needs a spin or three to fully expose its tremendous potential and intrinsic signature. When Floor takes lead over the orchestral string arrangements the song swirls (in thirds?) with power and the melody is insane. Vuorinen’s solo follows the signature of the vocal melody making it comfortable and intriguing. The addition of the orchestra in full swing adds a deep eluding dimension and introduces perfectly to the 2nd CD of the release, especially as the dying notes of the song are swiftly merge into the opening of CD 2, the 8 chapters of  `All the Works of Nature which Adorn the World’.

Narrated opening takes us into ,,Vista” which is a cinematic track dominated by cello making way for the tranquil string arrangements accompanied with chants. The cinematic output of the CD is endured on the following tracks that enrol like a love letter to nature and our planet. The CD can easily be used as a soundtrack to any of the `Life’ documentaries and the journey of the musical evolution evokes emotion and imagery beyond expectation. Holopainen switches from the cinematic Pokofiev and Hans Zimmer imagery to Orff’s `Carmina Burana’ (`The Blue”/“Moors’) and at times hints of Grieg’s uplifting `Four Seasons’ (`The Green’). Holopainen reveals musical geniality and the execution of the project is simply outstanding. Enchanting sections evoke images of lingering creeks in the green and forests shedding colours with the changes of season. Nature’s most impressive elements and most captivating changes are vividly brought to live and the indulgence of pompous Bach sections adds power to the palette. The musical diversity is binding. Just check out ,,Autorae” with its light opening and sudden powering emotions, the welling sentiments of ,,Quiet As The Snow”, or warm and blissful ooze of ,,Anthropocene”. It all adds to the first chapter of the album without losing the typical Nightwish mark. Much like ,,Endlessness” is the exclamation point of the first CD, ,,Ad Astra” (to the stars) concludes the musical journey of `All the Works of Nature which Adorn the World’ as it started on ,,Vista’’, with a voice-over revealing the concept of `Human. :II: Nature’. Explaining the story of the album and the history of mankind as part of nature and our world. Addressing the exploration, conquests and revelations, Kings and Queens, Superstar, mothers and fathers, saints and sinners of our species and their place in nature before the mention “that’s here, that’s home…that’s us!” After which the song starts to build drama with Floor pitching it into gear. Her angelic chants and strings and orchestration powering up make the end land directly in your gut. The unloading drama evokes goosebumps and sends shivers down your spine making us humans feel like just a tiny fragment of the bigger picture. It literally can drive you to tears realizing….

Yes: I said it…. This is a masterpiece!
—
HBLS review video single ,,Noise” here