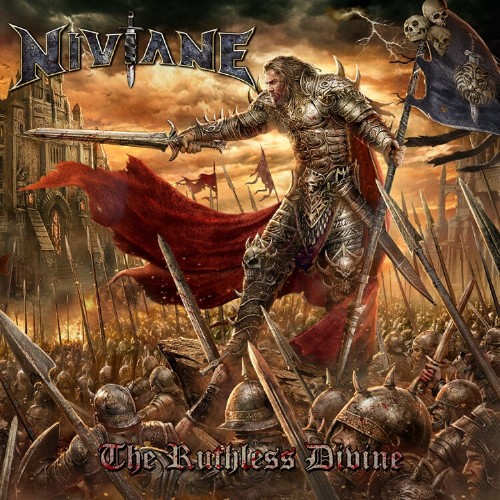 For Sacramento based six piece power metal outfit Niviane ‘The Ruthless Divine’ is their second record. Their debut ‘The Druid King’ saw the light in 2017. For lovers of classic melodic power metal this band could be interesting as their style is relentless, tight and has a lot of melody (hello Maiden and Metal Church!) in the guitar acrobatics that are being provided by Mark Miner and Gary Tarplee. There is also a steady keyboardist in the line-up in the person of Aaron Robitch but his role is quite modest. His keys are far on the background and are more to add some colour to a sound that is being dominated by razor sharps riffs and (as stated) melodic solos. If I would be Robitch I would quit as his input is practically zero. Vocalist Norman Skinner fits in well with this up-tempo metallic attack force. He at times gives ‘The Ruthless Divine’ a lot of extra grit with his voice that is quite versatile, to say at least. ‘The Ruthess Attack’ is in fact a title that hits the nail as it is an aggressive album with several old school Metal Church type of features. The only thing what you might want to criticise is that Niviane has one and the same approach and that is a full scale attack. Nothing wrong with that of course as the group does delivers some pile drivers like ,,Fallen From Elysium’’ (this is where Skinner really goes to town, as he does in ,,Psychomanteum’’ and ,,Sinking Ships’’) but in a way lacks a bit the skill to even put more variation in their music (or they just refuse to do so). It is full speed ahead and in a classic sort of manner. A ballad or a semi-ballad is clearly not on the cards with these lads. Not a record for the faint hearted and to be honest it has certain qualities that just can’t be denied.
‘The Ruthless Divine’ is an enjoyable and above all a powerful full throttle trip through classic metal land.