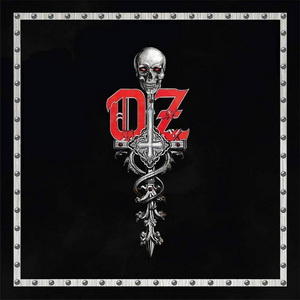 OZ is one of the oldest heavy/power metal bands in the rock history of Finland. Drummer Mark Ruffneck started this group somewhere in the seventies and in the eighties the band released a handful of albums of which the second one ‘Fire In The Brain’ was their best and most successful. After that LP the group got signed by major company RCA with no success. After a break of some years in 2011 the compilation album ‘Burning Leather’ was released by AFM as Ruffneck had gathered a new line up, that again fell apart after an US tour. But the drummer must be a very stubborn man because come late 2017 he is back again with fresh songs, a new CD and a completely renovated group. One thing has not changed and that is the musical message of OZ and that is still fast power and heavy metal with a big role for the relentless guitars of newcomers Johnny Cross and Juzzy Kargas. These two dudes really give the album a lot of juice and fire power. OZ also has a new singer in the person of Vince Kojvula. Hmm, to put it bluntly with his high pitched voice and his sometimes out of tune singing he really makes it difficult to really enjoy ‘Transition State’. Because of his antics really good songs life for instance ,,Whore Of Babylon’ just do not flourish to their fullest potential and that goes for the entire album I’m afraid. I must say that the sound of ‘Transition State’ is really good and although style wise a bit old fashioned perhaps the band itself does not disappoint. Maybe the replacement of their current singer OZ might be the next step in order have a future again.