PALACE OF THE KING-Get Right With Your Maker 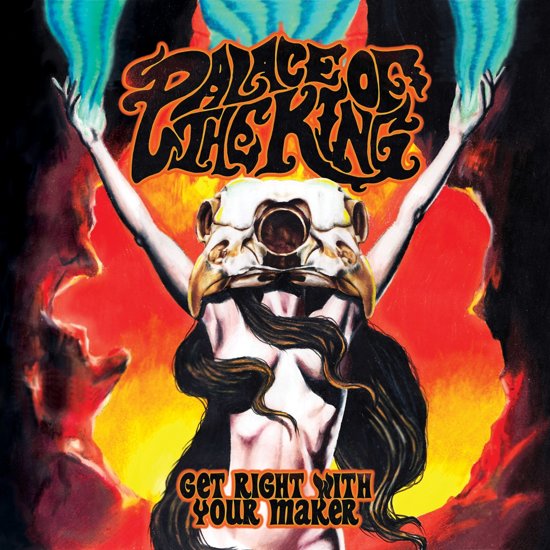 PALACE OF THE KING-Get Right With Your Maker

On their third full CD Melbourne, Australia based quartet Palace Of The King continue where they left off with their second CD ‘Valles Marineris’ and that is an energetic blend of vintage classic rock and more contemporary stuff. I cannot really explain why the music of singer Tim Henwood, guitarist/keyboardist Sean Johnston, drummer Travis Dragani and bass player Anthony Licciardi Garcia reminds me a lot of their countrymen of Wolfmother and a touch of Led Zeppelin. Has it got anything to do with the soaring vocals of Henwood, who produced the album as well? Or is it the melodic embrace between guitar and keyboards engulfed in lots of dynamic? It is possibly a combination of these elements that make this album tasty but not easy to digest sometimes. Henwood has a specific voice and style of singing that you have to get used to and the way some songs have been put together takes time to discover, digest and ultimately give in to. The first track ,,I Am The Storm’’ and the last one ,,Back On My Feet Again’’ are both quite long songs carried by high energy and intense singing and not every day arrangements. Just as you think that ,,Back On My Feet Again’’ has finished just hang around for a short while as the CD concludes with an acoustic part that belongs to the song but sounds completely different and could be seen as a ‘song within a song’. In between the first and last track there are several shorter rockers on which some style changes can be discovered making this band a little bit strange perhaps but on the other side quite intriguing and very interesting as well. It is clear to me that Palace Of The King is not your everyday outfit, as they do not seem to mind to mix things up hoping to surprise their audience without becoming freaky or too experimental. These boys have probably found the right formula to get their musical message across.