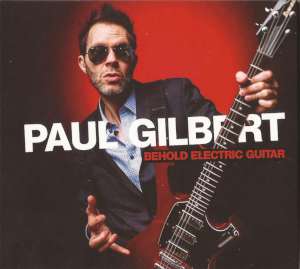 Guitarist Paul Gilbert should be a household name if you are into heavy rock and metal. He was for several years active in the metal band Racer X but gathered fame (and I hope for him some fortune) when he launched the band Mr Big with Billy Sheehan, Eric Martin and Pat Torpey (RIP). And in between he recorded some solo material as well of which ‘Behold Electric Guitar’ is the latest one. On this instrumental album Gilbert shows a few different sides of his trade. Not so long ago he discovered a new found love for jazz music and he has incorporated some of these influences on this record. Do not think that Gilbert has abandoned his heavy guitar playing, that is certainly not the case, but let’s say that there is more variation present than ever. The record is a showcase for the brilliance Paul Gilbert manages to get out of his guitar. Most of the time the songs are built on a theme but style wise Gilbert allows himself to mix it up a bit. That makes that ‘Behold Electric Guitar’ is a record that first of all will please guitar freaks that like a more ‘jamming’ approach. There is rock, heavy rock, some blues, some jazz, some fusion and alternative stuff. But above everything stand his immaculate way of playing. His rhythm section (drummer Brian Foxworth and bass player Roland Guerin) provide him with the perfect platform to do his thing on eleven innovating instrumentals where keyboards (provided by Asher Fulero) have a supporting role. If you like the last one of Joe Satriani I am convinced that ‘Behold Electric Guitar’ with its trickery and freewheeling character will capture you as well as this by John Cuniberti (Satriani) produced CD is drenched with quality.