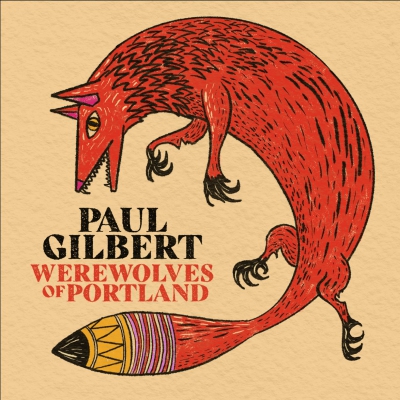 For a latest lesson in some incredible guitar acrobatics I would suggest you (if you are a guitar freak that is) clean your ears and have a listen to ‘Werewolves Of Portland’, the 16th album by Paul Gilbert (Mr. Big/Racer X). This time Paul decided to do all the instrumentation himself, the only assistance came from co-producer/engineer Kevin Hahn helping Paul record the ten tracks in Portland, Oregon. ‘Werewolves Of Portland’ is quite an adventurous ride to undertake with Paul’s guitar exploitations. The songs have always a nice theme and style wise Paul mixes things up. There are some slight jazz rock influences but the bulk of the album is pure heavy rock with some twists within the songs like for instance opener ,,Hello North Dakota!’’ where you might hear some light Brian May-like influences. ,,Meaningful’’ is a more playful track while ,,Problem-Solving People’’ is by far the heaviest hard rocking song followed by ,,A Thunderous Ovation Shook The Columns’’. Instrumental albums often have the tendency to become boring after a while but with Paul Gilbert that is certainly not the case. Check out the video Paul recorded for the title-track ,,Werewolves Of Portland’’ on YouTube, which is pretty funny and check out at the same time the Ibanez guitar that he plays on that one. An eyecatcher if you ask me. Just like predecessor ‘Behold Electric Guitar’ (released in 2019) this release by Paul Gilbert confirms that the man for several decades now is an innovator on the six strings and that his name should be in the same league as Gary Moore, Yngwie Malmsteen, Blackmore, Vai, Satriani and the late great Randy Rhoads. For me Paul Gilbert is in that league. It is about time that a bigger audience discovers the talent of this man who has always stayed modest and never showed any ego of any kind. Look at his stellar career with several bands and projects and look (and more important listen) to his own catalogue he built up throughout the years. This man has been grossly underestimated!