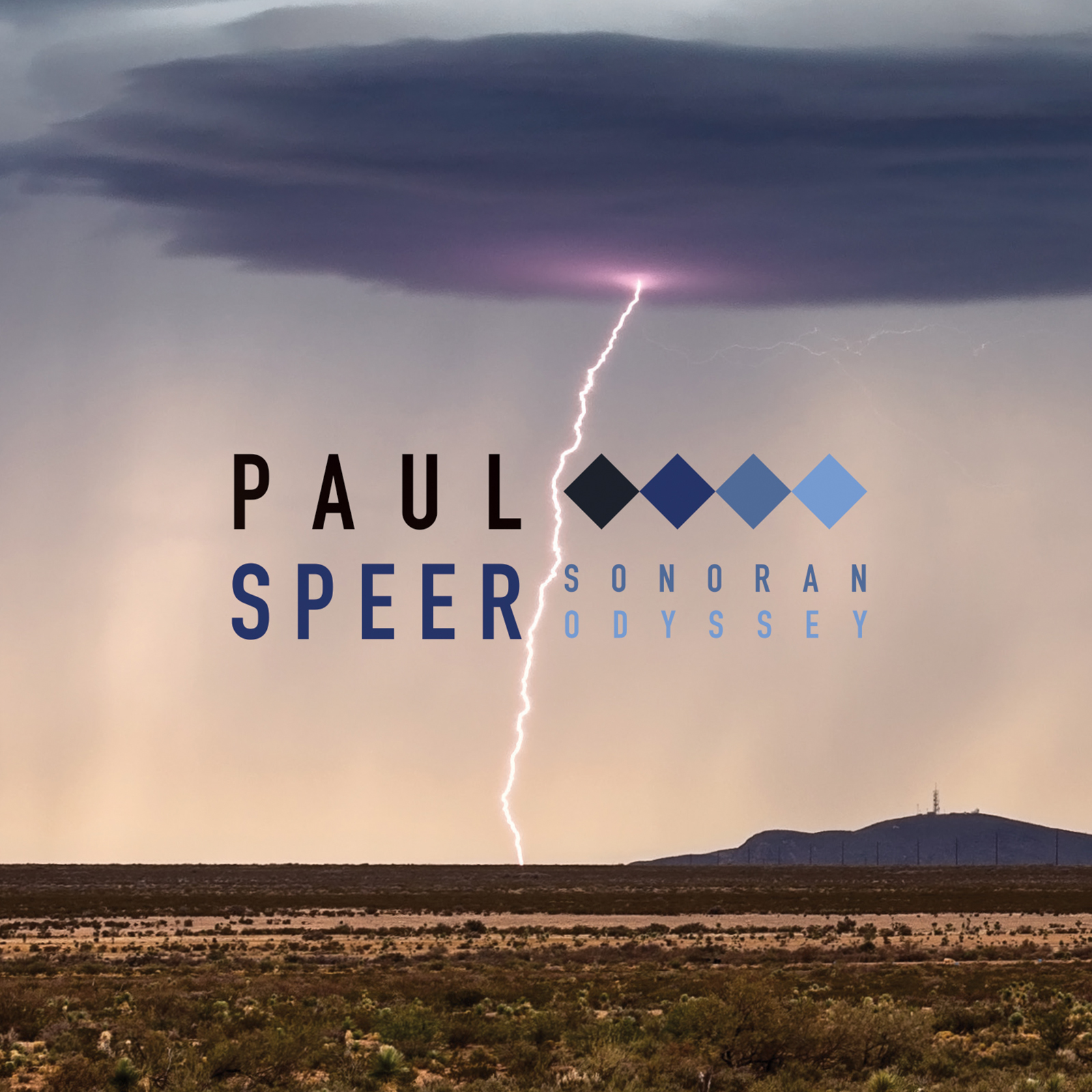 Back in the day American guitarist, bass player, keyboard player, producer and engineer Paul Speer came to my attention because of his musical collaboration with former Queensrÿche drummer Scott Rockenfield. To be specific; it was their second album `Hells Canyon’ [2001] I received for a review and interview and the spooky, exciting, adventurous and mysterious instrumental landscape they had created together on that album, blew me away immediately. So, if you can get your hands on it, I strongly recommend you to buy it.

Paul Speer has been around for a long time and not only he wrote songs for others in the past and collaborated with other musicians, he also made a bunch of cool solo albums. Recently his latest solo effort `Sonoran Odyssey’ landed in my inbox, as Paul himself describes it as “New Age music with teeth” and yes that absolutely hits the nail on its head. In general the music has a calm and stretched character and you can hear nature sounds and repetitive soundscapes, but Paul adds a slight rock vibe here and there, which makes it a crunchier experience than the average New Age music style. Paul has his own unique guitar playing style, a clear but full guitar sound and a certain play with notes, which I always find a pleasure to listen to. He never overdoes things, or makes it unnecessary complex and is definitely not tempted to show-off a wild circus of licks and screaming notes on his six string.

`Sonoran Odyssey’ contains 7 tracks and 3 bonus tracks, but some are different versions of the same song. Opening track ,,Sunrise’’ starts with uplifting, bright synthesizer sounds and when a calm guitar part comes in that becomes the focus point of the song, imagining yourself being in the desert during dawn. The second song ,,Monsoon (Thunder)’’ sounds more intense and robust, is beat driven for which Paul added excellent drummer Max Saidi to the game. Because of the drums and guitar solo style it feels more rock based. Also, the sound of rain and rumbling thunder in the background lift up the vibe and meaning to this song. You also get the version ,,Monsoon (No Thunder)’’, like it says: without the thunder and rain sound. ,,Moonrise (Full Mix)’’ clocks over 9 minutes and has a very ambient and desolate first part, which contains soft soundscapes and swelling synthesizer sounds. Halfway digital beats enter the scene and they built up the song having wailing guitar notes as a strong companion. When listening to this song you can imagine a full moon out there and the effect it has. This song also returns as ,,Moonrise (Demo Feat. Neptune)’’ on which Paul comments: “This piece was conceived around the NASA sounds from Neptune. As it evolved Neptune had a lesser role but I still like the original demo”. We get ,,Moonrise (Guitar Mix)’’, a shorter version and focussing on the guitar section and ,,Moonrise (Ambient Mix)’’, also a shorter version and super dreamlike.
For the bonus tracks Paul dove into his musical archive and came up with ,,Behind the Waterfall (2020)’’ which is a new version of a piece from the `Natural States’ album he recorded with David Lanz in 1985. Although this piece of music has its origin in a complete different time zone and synthesizers are less dominant, it remarkably fits well with the other songs. Drummer Ron Krasinski does the punch here and again with the distinct guitar style Paul shows his teeth indeed.  The second bonus track ,,Venus Rising’’ is based on firm digital beats and the centre of it is the guest appearance of flutist Sherry Finzer, who definitely confirms a New Age vibe, though Paul grips balance with his very pleasant guitar tune. The third bonus track ,,Jupiter Via NASA’’ clocks over 11 minutes and has been digitally released in 2016, the first piece of Paul featuring the sounds of Jupiter recorded by NASA. This track, which is very much focused on synthesizer sounds and soundscapes, lays down and breaths the epic feeling and endlessness of the universe, mysterious, spooky and sinister as well. Try to imagine all these planets out there and what goes on in the universe and you feel the vibe here.

`Sonoran Odyssey’ is an instrumental CD that takes the listener away from all the madness that happens daily on planet earth and one needs those moments in life once a while. Paul’s instrumental landscapes provide you to take a moment of relaxation and let your imagination go wherever it goes while listening. I am sure you readers by now realize this is not a (hard) rock or heavy metal release, but for those who are open minded to more calm instrumental (guitar) music, I can recommend to check Paul’s music.

You can order `Sonoran Odyssey’ here