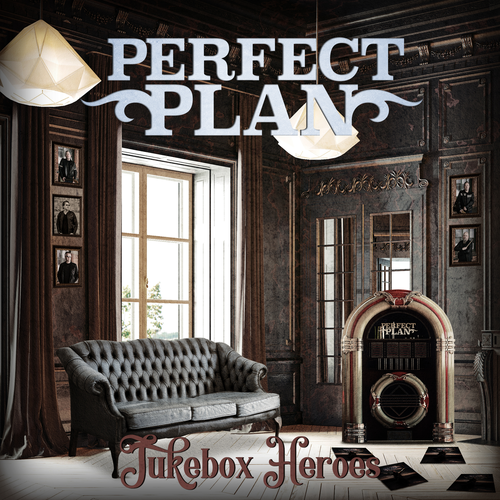 Colleague Michel v/d Moosdijk pretty much summed up the qualities of Swedish melodic rockers Perfect Plan perfectly. The album packed insane qualities and with Kent Hilli has an impressive vocalist at the helm, injecting the pristine tracks with emotion and sheer enthusiasm. `All Rise’ spent years in the making and with the EP `Jukebox Heroes’ the band gives a sign of life during the dying days of 2019 to leap forward into the next decade. `Jukebox Heroes’ is however an EP featuring cover tunes revealing the band’s inspirational bands, which we pretty much expected. And there’s one thing I am usually not fond of…

Cover albums; I have a love and hate relationship with them. I prefer to hear band’s own creations, but an occasional overtrick is gladly taken. Entire albums or EP as tribute to their influences I hear limping on thoughts though. Either you add unique twists, or leave as is, is my standing. Where so many fail to walk the fine line however, Perfect Plan manages to pull it off. Gracefully performing the originals with radiating enthusiasm and ever so gently injecting the tunes of their heroes with a soothing comfortable Perfect Plan trademark sound. Like Michel stated before, Hilli nails a perfect job and sounds reminiscent to the great Keith Slack of Steelhouse Lane fame. That being said it is delightful to hear how respectful the band treats the classics and morphs them into their own. Not closing for the obviously expected either, `Jukebox Heroes’ offers 4 tracks hit out of the ballpark on first spin. Survivor’s ,,Didn’t Know It Was Love” is injected with a sublime opening and only during the chorus receives the Perfect Plan make over. Little pumped up it simply catches on perfectly and it oozes the classic grandeur over a natural modern(er) sound. Less ordinary is The Storm’s ballad ,,Show Me The Way” that is powered up from the rather clinical original. With a powerful orchestration, the Swedes manage to make it just sound a little more radiant. It also reveals the how frail productions are at times, unable to fight the passing of decades. Gripping back to the original I found the albums being thin and little light to the ears. Injecting the exact right amount of modern techniques the track flourishes, and with the following classic ,,Stay”, they repeat the trick. Could Giant sound any better at all? I expected it to be a firm “No”, but with Hilli adding his emotional and diverse voice, the song enrols wonderfully and picks up momentum. Cutting some slack, Hilli also delves into the range of Phill Bardowell, adding a little rough edge that tings like Gramm. Foreigner’s ,,That Was Yesterday” benefits from this edge also and with Perfect Plan revamping the song into a piano ballad during the opening more dominantly, the tune ebbs and wells with emotion. It touches deep before it embarks on more common Foreigner terrain. Though it displays the band’s typical approach, it does add a little less to the original. It holds up well, but is outdone by those 3 hammer versions, revealing how well they executed those classics.

`Jukebox Heroes’ makes the wait for their 2nd album worthwhile. It also reveals the band’s great abilities recording. They display a monumental respect for their influences and pay tribute adding just the right amount of their own, without distancing from the root. Enjoyable, to say the least!