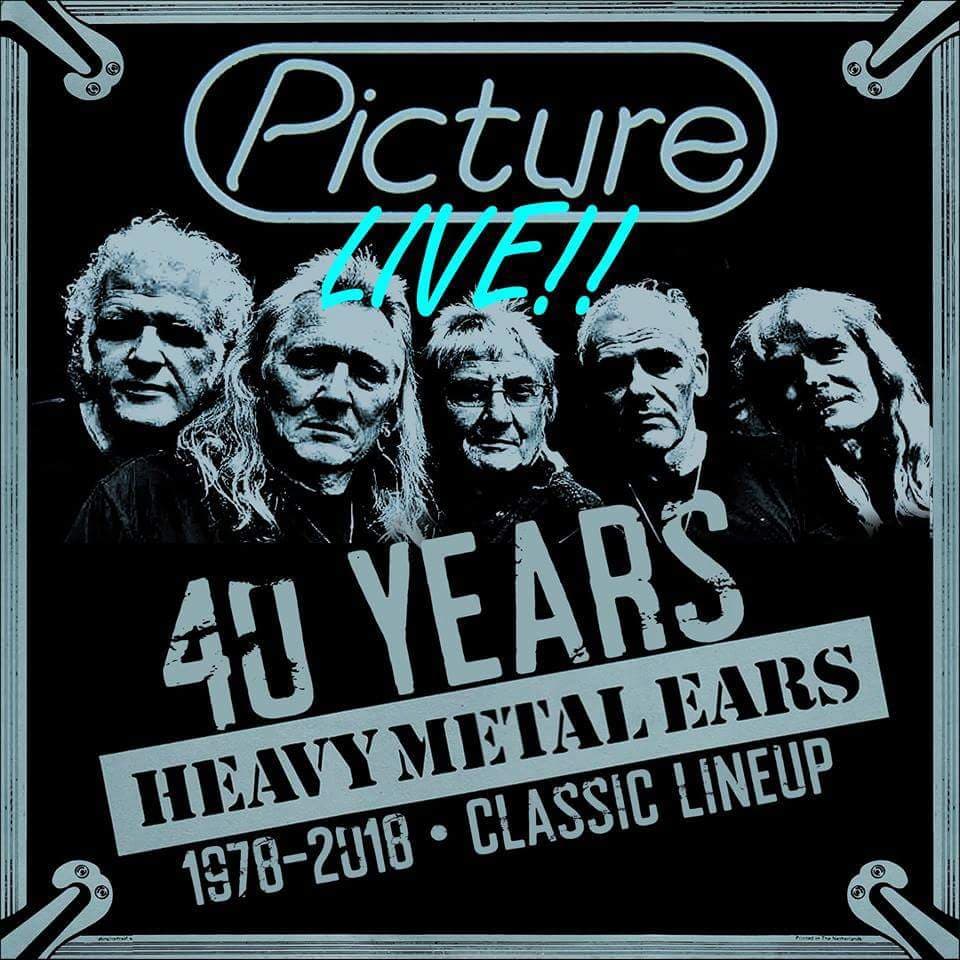 This is Dutch metal history! Picture was the first band that put heavy metal on the map in The Netherlands. I was there myself, have seen the band plenty of times and saw how they paved the way for other acts like Highway Chile, Helloise, Martyr, Vandale, Frankenstein, Vulture, Hammerhead, Hammerhawk, Elise, Elegy, Sword, Impact and so many others. Their first two albums (‘Picture’ and ‘Heavy Metal Ears’) were recorded in the line-up Jan Bechtum (guitar), Rinus Vreugdenhil (bass), Laurens ‘Bakkie’ Bakker (drums) and the man with the vibrato in his voice Ronald van Prooijen. Those four guys have reunited a while ago and added second guitarist Appie de Gelder to the group which has given Picture a fatter sound. The musicians of Picture have not always received the respect and honours for being the number one frontrunner and that is not fair. Their first two albums might not have had the best production but it surely got them noticed especially outside their own country. Their records were sold all over the world. When Ronald van Prooijen left the band he was replaced by Shmoulik Avigal, already then a veteran but armed with a voice that made you think more than once of the late great Ronnie James Dio. With him in the group Picture released ‘Diamond Dreamer’, until this day probably the best metal record ever recorded in The Netherlands. Soon after the release Avigal left after problems with the management and was replaced by Pete Lovell (‘Eternal Dark’ was recorded with him behind the microphone). Also Jan Bechtum left. For quite a while Picture kept battling on with Rinus (Hollands iron man of metal!) at the helm. Numerous changes in line up followed as did some more records before the band called it a day. Rinus and Laurens started Picture up again some years ago together with Pete Lovell before the original line-up reunited with the addition of Appie de Gelder. The last six months the group toured all around Europe with gigs in Italy, Portugal, France, Greece and The Benelux. During those gigs this record was cut. It has songs from the first four albums, seventeen in total including absolute classics like ,,Bombers’’, ,,You’re All Alone’’, ,,No No No’’, ,,Message From Hell, ,,Eternal Dark’’ ,,You Can Go’’, ,,Lady Lightning’’, ,,Get Back Or You’ll Fall’’, ,,Diamond Dreamer’’ and ,,Heavy Metal Ears’’. The enthusiasm of the musicians just bursts out of the speakers, just as it did all those years ago. Ronald still has that ‘vibrato’ in his voice which makes him so recognisable, Rinus and Laurens are as tight as ever, while Jan still is a great guitarist being backed up by Appie, sharing some  twin solos together. This is live, this is honest and raw. This is a bunch of musicians still enjoying their moment and this is the band that introduced metal to The Netherlands. A new studio CD is on the cards it seems for next year proving that Picture maybe 40 years around but that they are still young at heart.