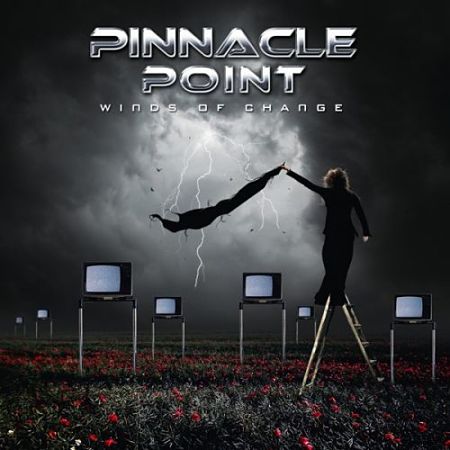 Pinnacle Point is a cooperation between singer/keyboardist Jerome Mazza and multi-instrumentalist Torben Enevoldsen. Insiders may know Mazza as singer of the Christian band Angelica while Danish citizen Enevoldsen should be a bit more known by rockers as he played in several bands like Fate, Acacia Avenue, Fatal Force and Section A and he made a bunch of instrumental guitar orientated CD’s as well under his own name (‘Guitarisma’, ‘Heavy Persuasion’, ‘Flying Solo’ and the latest being ‘Above And Beyond’ (2013). No idea how these two people got together, but it is a blessing in disguise that they did as Pinnacle Point delivers one of the best melodic rock records I have heard this year. Okay, let me just begin with the statement that the originality of ‘Winds Of Change’ is not very big. Mazza and Enevoldsen must have listened well to releases from Kansas, Seventh Key, Streets and Mike Slamer as ‘Winds Of Change’ is a perfect mix of all these mentioned groups and artists. Mazza sounds like a cross between Steve Walsh and Billy Greer and I think he would have been a great replacement when Steve Walsh decided to retire from Kansas. The big difference is that Enevoldsen has put in a bit more heavy guitar parts in the music and that is always a bonus in my book. But with the addition of violin player Cara C and the inventive drumming of Dennis Hansen (he gives several tracks a nice bombastic feel) the music just sounds a lot like Kansas, there is no denying that. But the way the songs are composed, so full of melody and flavour, the singing, the great production and the overall classy performances just takes all lack of originality to the background. At least it does for me! I really do not know which songs to recommend, as to me the whole album is a melodic rock symphony that is second to none. Especially Mazza is absolutely superb throughout the whole CD. It is a 50 minutes long trip through beautiful songs like ,,Damage Is Done’’, ,,Never Let Go’’, ,,Changes’’, ,,With You’’, ,,Sail Away’’ and ,,Homeward Bound’, just to name some. Heaven on earth people! The leading melodic rock record companies have been asleep on the job by missing out on this one. Make sure that if you like Streets, Kansas and Seventh Key you don’t miss out as well. Torben Enevoldsen and Jerome Mazza form a lethal musical combination, hopefully there is more to come in the future!