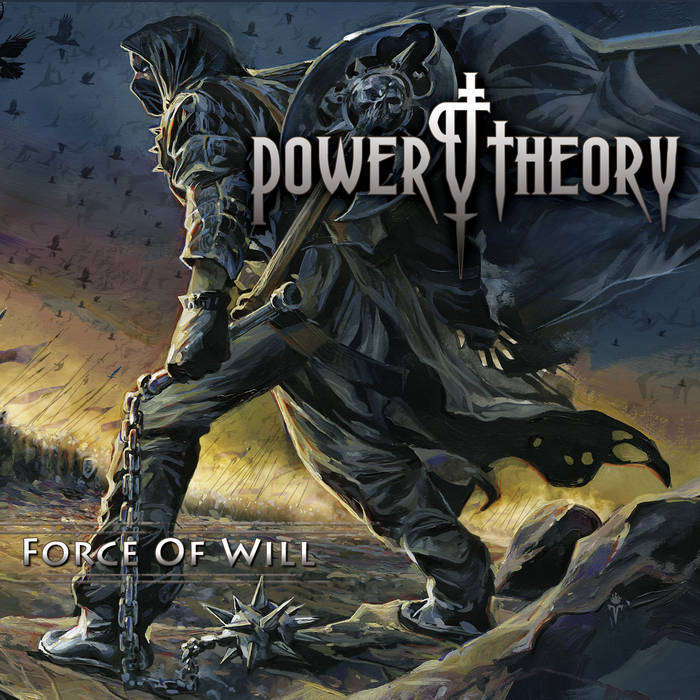 If you want to swing the axe and bang your head to a portion of classic heavy metal, then it is time to sink your claws into the new Power Theory CD `Force Of Will’. The album is the band’s 4th release and without a doubt their best, not to say; one of the best of the last few years. So, turn up the volume and check out `Force Of Will’….

,,Morior Invictus” is the grand opening to the album with guitars pulling forward to epic proportions, bringing us into the power metal unload of the album’s title track that spits power. Twin solos and powerful riffs from the tandem Bob “BB” Ballinger and Carlos Alvarez are unleashed with great wallop and drums propelling the song in the best US metal tradition. Much like classic acts Vicious Rumors and (later) Savatage, Power Theory fuses towering melodies with storming power and musical interaction. The songs are melodic and powerful and Johnny Sasso’s drums deliver the exact amount of action shifting between double bass and dynamic drum rolls. Alan d’ Angelo adds volume with his plucking bass lines that frequently align with the riffs shooting up and down. Over all of this classic metal power it is Jim Rutherford adding his powerful vocals. He echoes like Matt Barlow, but also packs the edge of Helloween/Gamma Ray’s Kai Hansen. He packs power and has a captivating tone with echoing pipes that overpower the wall of sound on the album. Ruthertford switches to a heavier roar on ,,Draugr” that packs insane melodies and impressive guitar interaction again. The twin melody in the short solo is excellent and the sound effects add to the blunt force of the power it packs. It is all powerful and melodic laying down hymn after hymn with the impressive ,,If Tomorrow Ends Today” with its insane dynamics, the fierce epic ,,Mountains Of Death” with patterns reminiscent to WorldView’s best tracks and the best Iced Earth has to offer. Chants add to the glorious power of the track and it all whelms with passion for the genre. Absolutely wonderful is the scenic ,,Albion” stretching 7 minutes with never a dull moment. Serene intro with Jim slowly kicking the song in motion. Musical interaction is pristine and it is Rutherford’s vocals that add posture to the dynamic groove of Sasso and d’Angelo, who reveals his true skills with his bass Ines swirling towards the wall of guitars. The contrast is powerful and adds to the appeal of the track that has enormous cinematic allure. Tapping another vein with the thunderous ,,Th13rteen” the band takes Judas Priest signature guitar into the storming track breathing fire. Again it is Sasso who adds true swagger and groove to the track and his playing is multi dimensional oozing a prog notes without distancing from the glorious metal classics. Much like Scott Travis is able to stay close to the driving force of a double kick that suddenly combusts with unexpected triple kicks or a stop motion pattern that injects an entirely different feel into the track. ,,Spitting Fire” sees Rutherford team up with Sielck of Iron Savior to fuse US power metal with the Euro metal galloping drums and higher pitches. The melodies are again impeccable and the band outdoes many with ,,Bringer Of Rain”. The song is an almost narrative sung track that keeps shifting and morphing with musical traction. On ,,Path To Glory” Ballinger and Alvarez deliver face melting riffs pulled forward by the swirling drum interaction of Sasso who’s double bass salvos spit gravel. ,,Shadow Man” again lays closer to the progressive elements marking the grandeur of Worldview’s excellent debut. Memorable hooks and choruses with epic appeal over intense power metal licks and waving twin melodies that unload in powerful solos, all well structured and composed. Much like the insane cinematic ,,Albion”, ,,The Hill I Die On” packs epic storytelling combined with great musical action. Just check out how the song is swung into motion and hear how turmoil and melody can go hand in hand. The dynamics are insane and the guitars fire fierce riffs paired with exquisite melodies over action packed drum and bass. Rutherford adds a varied style touching all outlines of his range and not falling short in dynamics either.

Power Theory’s 4th album (if I am correct) definitely is their finest moment. The music slowly crystalized into `Force Of Will” and with the current line up the band is on the prowl. This is by far one of the best classic power metal albums of the last couple of years, packing tremendous power and gracious melodies with a masterful execution to engrave it into history’s realms. `Force Of Will’ is an album you must have heard and is a must for fans of Wardog, Warrior, Iced Earth, Savatage, etc. On top it blends the classic ingredients with the more modern approach of historic acts Sabaton and Civil War.  These names I just sum up as a point of reference rather than putting their music into a box.
Power Theory is too much a stand-alone force metalheadz should reckon with.