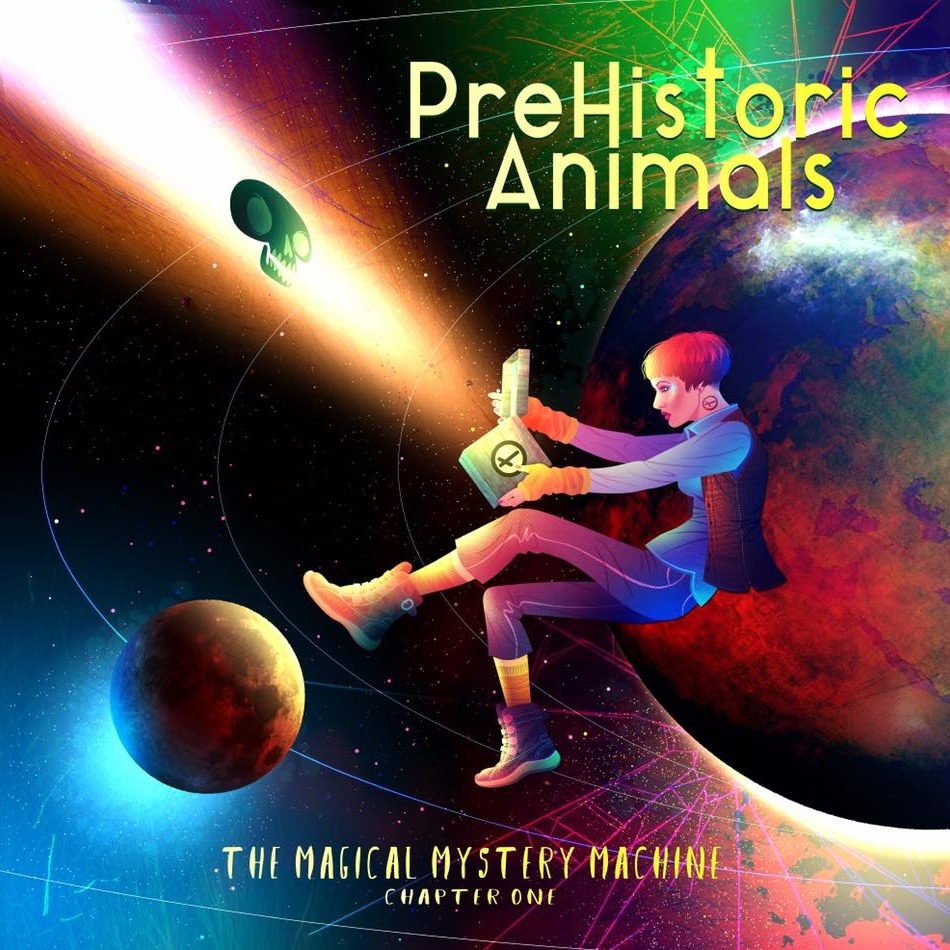 Two years ago PreHistoric Animals released their debut album `Consider It A Work Of Art’ choke-full of progressive alternative rock. Consisting of Samuel Granath and Stefan Altzar, the duo proven to be an interesting act to keep an eye out for. Expanding their line up into a four piece rock band, the act has set course with an even more tentative second release `The Magical Mystery Machine Chapter I’.

The concept is built around two main characters diary. Cora and Jareth are given the task to collect all pros and cons and the good and bad of humanity to rebuild earth somewhere in the galaxy. Using the Magical Mystery Machine to store all detailed information they find out the earth is dying and there is no time to waste. Its conceptional setting is a little corky but packed with poetic lyricism and state of the art wordplay it becomes captivating and alluring. The storyline is outlined by excellent musical marksmanship and executed with the right dose of sincerity to make it whelm with great intention. It links to classic prog from the seventies like early Genesis and Pink Floyd as well as it bridges gaps with modern rock music and acts like Muse. Some ingredients from the wave era are added subtly. The core of music is a driven progressive strain of heavy guitars and Granath’s prolific drum shuffles, as proven on the gripping YouTube video release ,,Floodgate”. It marks metal all over, but snuggles to alternative pop as well. Balanced on the fine line between art and progressive metal, the band delves deep. The sense of frustration welling from the vocals eludes in gigantic orchestral choruses with the music switching eclectic to pompous. It is intense and powerful but still taps the right pop-vein to make it nest instantly. Soothing charming melodies line up perfectly with Altzar’s expressive warm vocals, making it enjoyable while all is deceptively complex at the same time. Check out the online video to the song and get lured into the concept of `The Magical Mystery Machine’. The title track wells with ominous melancholy towards a hectic Beatles-esque coated vocal section. Keys and guitar riff got against the grain with complexity increasing. Intensity is key and the song oozes a comfortable 70s feeling as well as it packs tremendous power. Withering agony spawns from the hook laden ,,No Mortal Girls Has Ever Seen The Light Inside”. Melodic perfection ingrained in the discomfort of energetic time changes and polyrhythms. What PreHistoric Animals do extremely well is picking up the drivers of songs and interlace them with the opening of the next track making it all flow fluently. Not using a conceptional melody to bind but rather feeling or drive the overall groove benefits with captivating result. ,,What A Lucky Day” features the same intense drivers as its predecessor’s turmoil casted musical segments. The larger than life bridge and towering chorus instantly hook in you and its melodic progressing vocals are intense and engaging. Midway the song flourishes with classic 70s prog elements injecting an enchanting Floyd’ish subnote. ,,First We’ll Go To Mars” opens with a blistering riff and hammering drums underneath subtle modern keys and sound effects providing a cinematic enticing feeling. Vocally it switches constantly adding to the lustre and posture of the track. Frequently the track sheds skin, switches from brooding to melancholic, with an intense solo in its mid-section where the band goes all prog and art-rocking. They delve deep on the emotional rollercoaster. The song paves the way for the glorious, 10-minute running, ,,Into Battle (like my Father)”. Pitched guitar melodies start flowing and hovering over the brooding bass and intrinsic drum shuffles before all is disrupted and smothered by the intrinsic vocals. Sound effects give it a cinematic epic taste and when guitars pick up again it starts meandering more melodic with insane hooks and glorious welling emotions. Steep blunt riffs take over underneath ominous chants to morph into jazzy spun sections, like TOTO on acid. Drums and bass start to merge with increasingly abject guitar interaction from Altzar and Daniel Magdic (former Pain of Salvation). Twisting and bending the musical horizons PreHistoric Animals clearly gain momentum as a band. Vocally it is Altzar’s best performance with him switching from Bono-ish to Gabriel-esque, covering all aspects of the vocal pallet. ,,…There’s A Bullet In The Barrel, Make No Mistake” proclaims the lunacy of the song’s mid-section when it ebbs and wells with whaling bridge and chorus. There’s insanity inside the lush melodies. Dying out with a Gilmour signature end solo.

PreHistoric Animals made a mark with their debut, but outdo themselves on `The Magical Mystery Machine’. Intensifying their key ingredients, they will appeal to a wide audience of rockers and metalheads. Heavy progressive with smooth melodies, the songs instantly are in your comfort zone to nest. Switching frequencies and tone they prove musical marksmanship adding captivating and fascinating depth. Gifted to blend musical extremes, the clear and transparent but dense production truly radiates. PreHistoric Animals are a band to embrace.