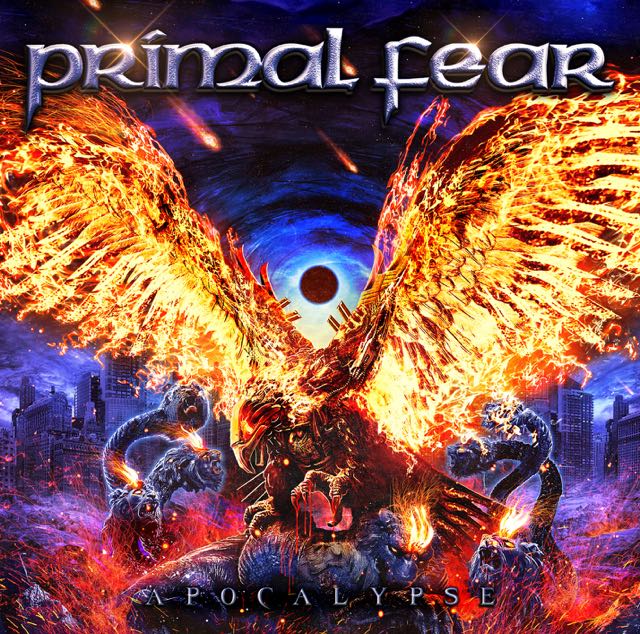 The last two albums ‘Rulebreaker’ (2016) and ‘Delivering The Black’ (2014) were both very successful albums for Primal Fear, the German power metal band formed in 1997 by Ralf Scheepers [lead vocals] and Matt Sinner [bass guitar and vocals]. ‘Apocalypse’ is the title of the 12th new studio album by Primal Fear and I think that this one will become another milestone in the career of these German metal rockers. ‘Apocalypse’ features 11 new tracks and right from the start the sound is very recognisable and unmistakeably Primal Fear; old school heavy metal blends with modern, up to date metal and the variety in tempo – you get fast songs and slow songs – is evident, making this album a real pleasure to listen to. The guitar work of the three Primal Fear guitar pickers Alex Beyrodt, Magnus Karlsson and Tom Naumann is more than excellent and sounds, thanks to the outstanding production of Hansen, very heavy indeed! The first single can already be heard and is called ,,Hounds Of Justice”, a typical Primal Fear track, very bombastic with great guitar hooks, a catchy chorus and a short dirty guitar solo. This track sounds like more and when you hear the rest of the album you cannot deny that these guys rock. ,,King Of Madness” also features a very addictive chorus, while other songs are really heavy featuring neck breaking guitar riffs and hooks. Singer Ralf Scheepers sounds better than ever and especially in the more than excellent track ,,Supernova”, he really shines like never before. The absolute highlight of this ass-kicking metal album for me is ,,Eye Of The Storm”, the longest track on the album, which features everything this outstanding band has to offer; play it loud and go crazy! Primal Fear has done it again and for me this is their best release since their most successful album ‘Unbreakable’, which dates from 2012. By the way, if you buy the deluxe version of ‘Apocalypse’, you will get three bonus tracks, being: ,,Fight Against Evil”, ,,Into The Fire” and ,,My War Is Over”.