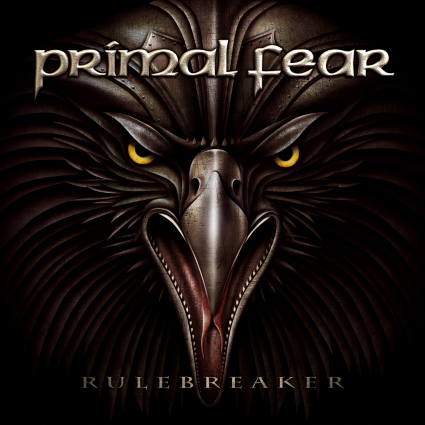 The core of Primal Fear exists of vocalist Ralf Scheepers and bass player/producer Mat Sinner. Since the first CD ‘Primal Fear’ (1998) this duo has been the leading force behind a band that has always stayed true to heavy metal. Never ever there has been a compromise or a knee fall in the musical style to gather commercial success. I admire the band for that nobility and for me they belong in the same category as for instance Saxon and Judas Priest. Guitarist Ton Naumann (who was also a founding member) has made a comeback and drummer Francesco Jovino has joined the ranks after a long spell with U.D.O. Further involved are guitarist Alex Beyrodt and Swedish master Magnus Karlsson (guitar). In the coming months Primal Fear will hit the road in Europe and the United States of America, so check out their website for the dates. As far as I know Karlsson will not be participating in the live gigs but he remains involved as a songwriter. ‘Rulebreaker’ has a bunch of heavy metal songs with crushing guitars, thundering drums and Scheepers’ unmistakeable high pitched power vocals. When he opens his gob you know straight away which band you are dealing with. He has given Primal Fear such a recognisable sound and style. Every now and then the band takes the foot of the gas pedal (,,The Sky Is Burning”, ,,We Walk Without Fear”) but most of the time we are smothered in pure melodic heavy metal with songs like ,,Raving Mad’’, ,,In Metal We Trust” (how appropriate) ,,The End Is Near” and ,,Bullets And Tears” (hi there Judas Priest). This CD will be released in different formats (Deluxe CD/DVD, CD and even on vinyl), so take your pick and start banging that head with ‘Rulebreaker’!