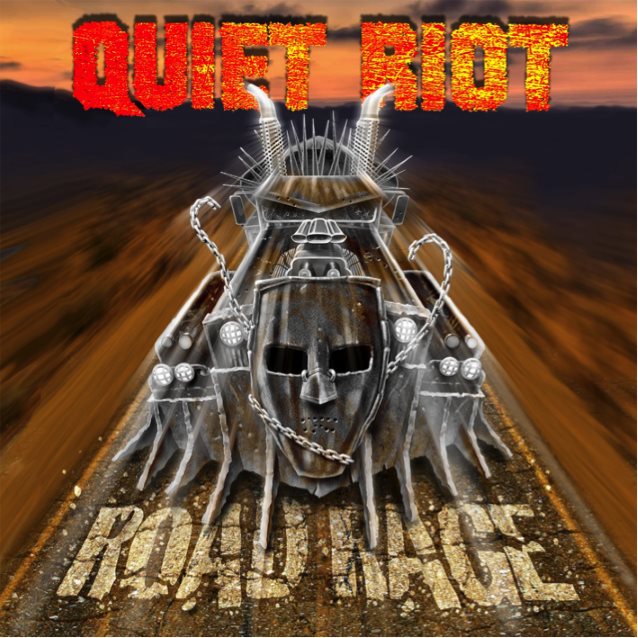 Quiet Riot was the band that launched the career of a certain guitarist called Randy Rhoads. In the late seventies Rhoads recorded a few unsuccessful albums before joining Ozzy Osbourne and setting the rock world on fire with the first two Blizzard Of Ozz albums before so tragically dying in a stupid and avoidable plane accident. The other remaining members of Quiet Riot went on and became very successful in 1983 with the ‘Metal Health’ CD and followed that up with ‘Condition Critical’. Their energetic party and arena rock and a crazy cover of a Slade classic put singer Kevin Dubrow and drummer Frankie Banali in the limelight. The band stuck it out for quite a while, did not have any more major success, did stop and start a few times but came to a halt when Dubrow died from a drug overdose in 2007. The last couple of years Banali (with the blessing of the Dubrow family) kept the band alive and with singer Sean Nicholls, veteran bassist Chuck Wright (bouncing in and out the band like a jo jo since 1982) and guitarist Alex Grossi recorded the album ’Road Rage’ set for release for the early months of 2017. A few weeks before the release (promotion copies were already circulating) it became clear that Nicholls and the other band members were not that compatible after all, forcing the band and the record company to postpone the release and look for a new vocalist. The position behind the microphone was soon filled by James Durbin who participated a few years ago on American Idol and getting pretty far in that competition even sharing the American Idol stage with Judas Priest and Rob Halford! After that Durbin recorded a few rock albums of his own with limited success so now he has joined a band that has members that could all be in line to be his father I guess. The band has reworked the songs, changed things around and they are ready to make their mark with their new singer. It is useless comparing the new version of ‘Road Rage’ with the old one, but to be brutally honest: this is a mediocre typical American party rock record. This genre is as good as dead, although in America plenty of bands are still touring in a certain rock circuit. But in the rest of the world? It is not that ‘Road Rage’ is a bad CD, but the style is totally out of date and Durbin’s high pitched voice just does not seem to flourish in this particular style. The boy can sing, he has proven that more than once, but somehow I have the feeling that he is not the right voice for Quiet Riot, although Alex Grossi’s guitar exploits are sometimes brilliant and Banali still hits with style, power and groove. The total picture just does not come across. A band like Warrant that fishes in the same pond as Quiet Riot has done a much better job on their latest effort ‘Louder Harder Faster’. Maybe Quiet Riot should have taken a bit more time for this release that sometimes makes the impression that it was a rushed job because of the happenings with Sean Nicholls.