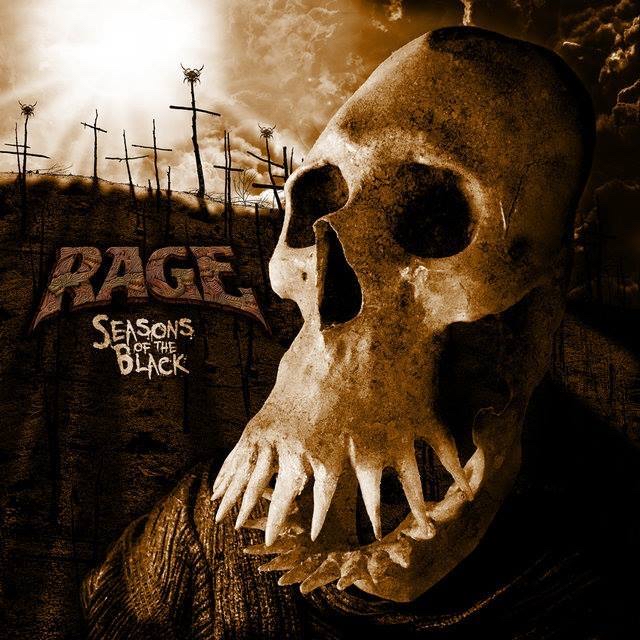 Rage is a typical German power metal band and the trio built around bandleader Peter ‘Peavy’ Wagner is very successful and also very productive. It is only fourteen months ago that Rage released their predecessor ‘The Devil Strikes Again’, and now they come up with their 23rd studio album called ‘Seasons Of The Black’. This new album contains 11 songs and if you liked ‘The Devil Strikes Again’, then you will love and cherish ‘Seasons Of The Black’, as I think that this new album is even better. This is mainly due to the fantastic opus track called ,,The Tragedy Of Man”, a power metal epic clocking over 20 minutes and divided into four parts, being: ,,Gaia”, ,,Justify”, ,,Bloodshed In Paradise” and ,,Farewell”. Musically this Rage epic is very diverse and bombastic, lyrically ,,The Tragedy Of Man” is about the extinction of mankind. But there is more to enjoy on this album, take for example ,,Serpents In Disguise”, which is very aggressive and features a typical Rage chorus; or ,,Time Will Tell”, another highlight of this album, with a very cool chorus and great guitar solos by Marcos Rodriguez. However, unfortunately not all the songs on this album are of that high quality as ,,Septic Bite” is just a rather mediocre “filler” and needless to say that Peavy is not the greatest singer in the universe; but his rather “raspy” voice (still with German-English accent….) fits to the power metal music of one of the best German bands of this moment. ‘Seasons Of The Black’ is an excellent power metal album, featuring a lot of cool riffs, grooves, melodies and even, 33 years after the band started,  new musical freshness. As a special goodie, this new album comes with a bonus CD containing 6 tracks, being: ,,Adoration”, ,,Southcross Union”, ,,Assorted By Satan”, ,,Faster Than Hell”, “,,Sword Made Of Steel” and ,,Down To The Bone”. These six songs are not new and die-hard Rage fans will have them in their record collection, but this bonus CD is a gift ,,to our fans and to ourselves’’, says Peavy. The 6 songs are very old and they were released under the band’s original name Avenger. So, power metal fans, an extra gift along a great album, what more do you want; buy or die!