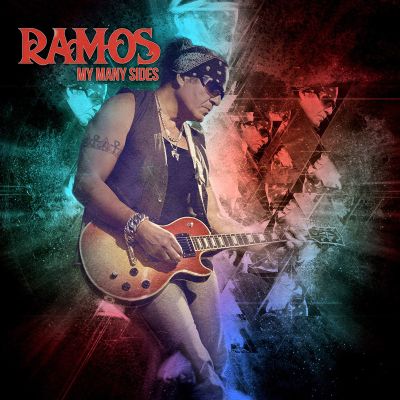 Guitarist Josh Ramos started out his career with the heavy metal band Le Mans, releasing a fine metal album called ‘On The Streets’ somewhere in 1983 where he traded licks and solos with Derek Frigo (very talented guitarist, later in Enuff Z’Nuff for their first three albums but a hopeless drug addict which cost him his life at the age of 37 in 2004). Josh Ramos went on to play in bands like The Storm, Hardline and Two Fires, released a band album under his own name Ramos in 2009 called ‘Living In The Light’ (very good CD by the way), released an album with top notch singer Hugo later on entitled ‘The Dream’ and was also part of the trio L.R.S. that also released an album on Frontiers Records some years ago. On his new record Ramos has gathered some vocal talent around him that is second to none. Tony Harnell (Starbreaker/former TNT), Danny Vaughn (Tyketto), Harry Hess (Harem Scarem), Eric Martin (Mr Big), Joe Retta (Heaven & Earth), Terry Ilous (XYZ/ex-Great White), John Bisaha (The Babys, who are being kept alive by original guitarist Walter Stocker) and Tony Mills lend their voice to the songs that Ramos came up with. In the case of Tony Mills it was one of the last recordings he made before he sadly passed away in September 2019. Also playing along are bass player Fabrizio Grossi (Supersonic Blues Machine), drummer Tony Morra and a few keyboard wizards (amongst them Eric Ragno). With a line-up like that what could go wrong? The thing is that the production of the album by Fabrizio Grossi appears to be doubtful and that surprises me highly. Some songs just sound like demo recordings as especially the drums and bass parts lack something. Maybe the budget was very limited, maybe it was recorded over a long period of time and at lots of various home studios but at the end of the day the album sounds like it was recorded on a misty Monday morning. That does not mean that a melodic rocker should just ignore this as the guitar work by Ramos is nothing to be sneezed at and there are top singers at work here. Especially Joe Retta from Heaven & Earth (their new record is recorded by the way and comes out hopefully later this year) might not be the most famous name singing on ‘My Many Sides’ but the man is very good indeed. Retta sings on four of the twelve songs and is an all-round guy that can handle all genres rock music has to offer. In ,,Ceremony’’ the album has a nice instrumental with a dreamy character while actually all songs are very decent. But you just somehow keep the feeling while listening that the full potential is never ever reached because of the rather mediocre total sound. So go and check it out as there is plenty to enjoy and the musicianship is at stages excellent and keep the sound problems in mind.