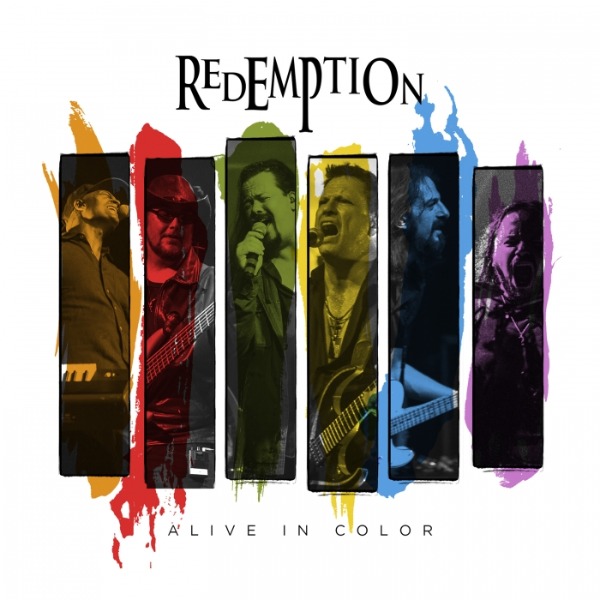 I’ve always had my visor on Redemption in the past. With Fates Warning’s Ray Alder they featured the colorful vocalist that gives that little extra kick to a progressive tune. The bite and high pitch needed. Either that, or a voice powerful and wide is needed to make the music come to life. Musical wizardry always at hand, it is often the vocalist making the difference. Plus: Redemption also made the difference with guitarist Nick van Dyk’s engaging intense songwriting and the engagement of appealing contributors eventually often extending their stay and ending up performing with the band, making Redemption the prog metal wet dream for many.

With the departure of Ray Alder and Chris Poland’s (Damn the Machine, Megadeth) lesser availability I somewhat feared for the band’s name to be withering. ‘Long Night’s Journey Into Day’ however proved the band longevity and eventually lead to this one-off recording of their show at the USA ProgPower festival where many joined the band onstage.

To me however it is obvious that Tom Englund (Evergrey) instantly made us aware that the band was to embark onto a new journey. His mesmerizing vocals came vividly to live on the album and onstage he is clearly the frontman a band needs. Not armed with his guitar he sometimes comes across a little lost, but he makes up for it with an insane vocal performance on all tracks he is involved with. Focused on his vocals more predominantly he not misses a note and drops his performance powerful as a battleram. He also adds a deeper emotional falsetto to the tracks with his melancholic vocals. Rather than pitching the Alder highs, the music now leans more dominantly on the powerhouse vocals and elemental melodies.

Redemption however is so much more than a vocalist. With Poland returning to lay down his insane riffs and intense soloing it is van Dyk who feels backed by a player of his magnitude obviously. Van Dyk steps forward more frequently and his interaction with the insanely talented Vikram Shankar really radiates. The extravangant qualities of the foundation builders Chris Quirarte (drums) and Sean Andrews (bass) is tremendously adding volume on this album and the interaction is spot on. The entire poise just rocks like a madman and the production is jaw dropping. I have never heard Redemption delve so deep and never heard it being captured so well. Man, just check out ,,The Suffocating Silence” and the perfect musical insanity of ,,The Echo Chamber” and you know this record is not to be discarded. It is just two of the many highlights perfectly captured on this live release. ,,Damaged” is spot on and I can’t imagine it sounding better than this. Friedman isn’t even present, but Englund definitely makes it shine and makes way to van Dyk. The entire performance unravels like a showcase of marksmanship and musical joy. It just splatters of the edges, perfectly captured by filmmaker Patric Ullaeus who managed to capture the intensity of the show perfectly. Redemption’s performance draws from the band’s elusive catalogue and the addition of praised players is adding to the joy. It’s a perfect cut of ‘best of’ being performed live. All tracks are hits and performed spot on with Englund pulling the performance. He and the band are interacting on an unimaginable high level and the fun of performing radiates of the recording. Yeah, there’s moments Tom has to work harder than he can (,,Little Men”), but he is keen enough to bring in the audience and win their credibility interacting with them on a personal level that alder never managed to do.

With Alder making a guest appearance on the crowd pleaser ,,Threads”, you know you’re in a great hotseat to enjoy the music of this project. Chris Poland adds his skills to the insane ,,Indulge in Color” and the Megadeth classic ,,Peace Sells”. It all adds up perfectly. Just check out the ravishing bass opening from Andrews and the riff laid down in its most pristine form by Poland. The vocals are spot on and neurotic as in the past, but the addition of the multi layered voice is insane. Better than any of Mustaine’s performances, ever… check out the breakdown of the track: Amazing!

Another pinnacle point of the album is the possible comparison of Alder vs Englund. Both have their personal qualities and Alder definitely is the more celebrated one perhaps, but when you hear Englund’s performances it might surprise us how well he gels with Redemption’s music. His performances are deep and more melancholic, true. But his performance of ,,Threats” is no less than extraordinary. The man gives the song an entirely unique identity. It is the most fun part of this 2CD release; the ability to compare and check the impact on the overall sound.

‘Alive In Color’ is a must have for all fans of the band as well as all fans of progressive metal in general. It displays the perfection the band around van Dyk brings to the stages. With a stellar line up adding to the joy, it may not be passed by. Their performance at ProgPower mandates to be listened and viewed. Must see, must hear….