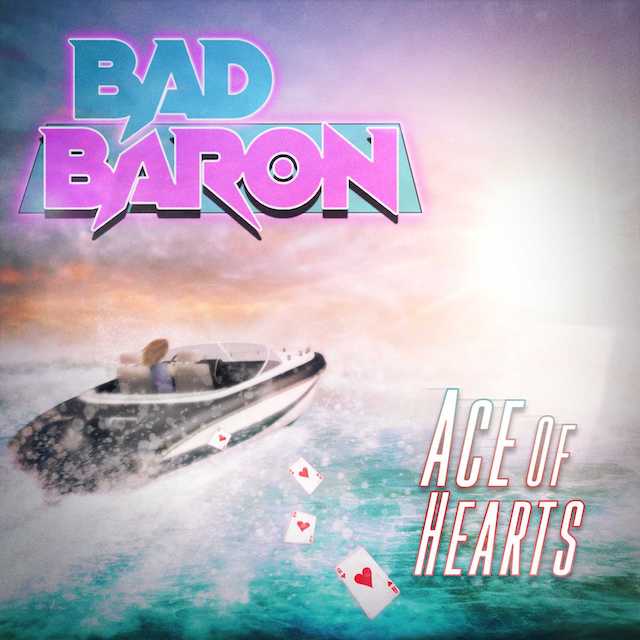 Reviewing albums, one gets fired dozens of new releases in his mailbox weekly. It is nearly impossible sorting and selecting, and more than once I find myself emptying my mailbox after judging a cover, or listening to an intro only. This might backfire as I frequently got confronted with albums I missed.

One of these is Bad Baron. Their front cover, with a speedboat blasting into a pastel tinted sunset, turned me off almost instantly. On top the Miami Vice color setting of their band logo also didn’t attract, but it caused me to find solace in Angry Metal Guy’s review. He literally smashed the band’s debut, and mentioned the same appalling cover art putting my findings in words one on one. With his review stating “What attracted Finnish masochists Bad Baron to the bottom of the barrel in one of music’s most terrible eras?” however, I wasn’t cringing to the words. It drew me out to discover whether or not AMG’s findings are right.

True; I love Angry Metal Guy. How he smashes his own heroes if they fail to launch, and how he serves criticism, evokes me to read. More than once it challenged my own findings, or I allowed a band a second or third spin after reading AMG’s review. Bad Baron’s review got me curious… Not only because of his bashing, but mainly for the one-liners and reactions to songs and the genre presented. Provoking fans of the 80s and 90s hair metal genre, he didn’t pack guns for this knife-fight… he armed himself with enough C4 to blow the genre out of the musical history books.

“Bad Baron pay tribute to the B and C list artists who littered 80s movie soundtracks with vapid rock anthems and forgettable saccharine power ballads. It was a strange and wonderous time for those of us who lived through it.” To continue: “…countless unknown artists tested their metal on the soundtracks to the endless VHS atrocities that littered the local mini mart’s back corner.”

YES, IT IS PREDICTABLE

Exactly the statement that caught my attention with `Ace of Hearts’ playing continuously for a day or two. He is right: for metal heads this album is severe torture. Towering melodies, sticky choruses, slick and lush guitars, tons of pompous keys, and more hooks than one can imagine. Melodic mayhem! For fans it is the exact opposite.

From the opening ,,Edge of Dreams” onwards is it an album packed with insane melodies and layers of keys. Tacky predictable lyrics on the verge of tilting over, sticky hooks and stickier choruses: It is all there, dangerous close to the deep dark void AMG wants to dispose it off into. Yes, it is predictable…
But man, can we enjoy the simplicity of party rockers? This is delivered with such devotion, and even have me question the authenticity frequently. I mean; come on, how slick can you get?! There are moments I suspect them to parody the genre, if it wasn’t executed with such devotion.

Alex Kron’s towering keyboards lay down a carpet of swirling pomp for Tommy Widdow to inject his lush and mega-melodic guitar deliveries, perfectly toned riffs and meandering guitar pitches are dominating the forefront. Sammy South’s drum foundation is solid and powerful, not overly pushy. It kicks and rumbles if needed, tones down for prolific sections, with singer/bassist Huovinen adding the right low notes.

,,Breakdown in Communication” evokes a hardworking Winger vibe with denser keys pushing it to pomp rock at times. Switching registers with guitars delivering melodic off riff melodies, ,,Rebel Heartache” warps you back into the 80s, as does the power rocker ,,Going Down in Flames” with ploughing bass and swirling keys coloring it. The song blossoms with an interesting guitar and key interaction midway. Live cracker per se. Solid tracks with enough appeal to grow upon you.

Absolutely enjoyable is the excellent ,,Hungry” with its nesting hooks and dynamic opening, and pulsating bass. The chorus is nesting, spot on. Flying the flag of hard rock, Bad Baron delve into the rousing ,,Lights go Out”, with ponderous beat and heavy guitars. Fist pumper! Same ingredients are in place in the forward rocking ,,Rock in the City” that does exactly what its title calls for. Tacky and predictable at times, it also packs sterling guitar arrangements and off genre keys. It packs a punch with its stirring outcalls, to surprise with some layered vocal section. The song breaks into another throbbing sleazy hard rocker.

,,One Minute to Midnight” is again balancing the predictability scale, with its pre-chorus tilting (,,Tic toc”) it over. Enjoyable still, but songs like these are the ‘why’ in my review. ,,Can You Love Someone (for Just one Night)” is on the edge and goes, due to the somewhat flat vocal delivery by Huovinen, but features a hard rocking punch underneath. Listeners need to adjust. ,,Interlude” is a meandering instrumental opening to the slow-paced throbbing ,,Our Story Isn’t Over”, with a slick bridge and poppy chorus. Huovinen again isn’t unshakable with a frail vocal delivery. Setting things right, Bad Baron revives the 80s semi ballad on ,,Long Road Home”. Nesting instantly, the Firehouse opening morphs into Warrant attraction, eventually pawing into the classic Whitesnake appeal. Switching back acoustic and electric, Bad Baron manages to unleash one of the best semi-ballads of the last decade(s), with Lauri delving deep, hitting the right notes.

It is an upbeat to the closing ,,Anthem for Rock ‘n Roll” with its impeccable guitar melodies and powerful opening, musically reminiscent to a national anthem. A true fist pumper with nesting melodies and grande hook and nesting loud chorus, living up to its song title 110%.

True, I had to get into `Ace of Hearts’, and its lyrical content is predictable and tacky, but Bad Baron certainly delivers. The melodies are all A-grade, with towering hooks and nesting choruses the album progresses as an 80s favorite. Sure; it is predictable and sometimes even tilts the balance. Bad Baron delivers an album that will certainly please a vast number of melodic rockers and AOR -adepts. The Hair metal and sleazy underscore enhance it and broadens the horizon for many more even.

Very enjoyable, and like Angry Metal Guy stated: “If you’re hosting a ‘back to the 80s’ party or want to create a drinking game around painful lyrical clichés, this could be your soundtrack.”

Party on Wayne. Party on Garth! Above all; PARTY ON FOLKS!!!