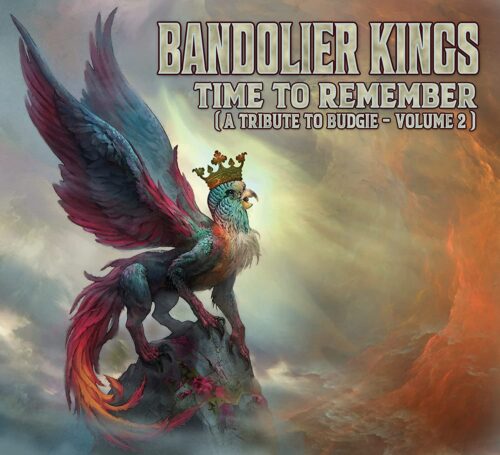 September 9, 2022 by Michel van de Moosdijk - More about our team

On January 10 of this year at the age of 71 Budgie founder/singer/bass player Burke Shelley passed away leaving the world with a rich musical anthology. Although the band from Wales never reached the big-time status their albums from the early and mid-seventies were well liked and also influential for many other bands. When the NWOBHM exploded in 1980 Budgie made a cracking comeback.

First with the 4-track EP ‘If Swallowed, Do Not Induce Vomiting’, followed short time later by the massive album ‘Power Supply’ and in 1981 with the album ‘Nightflight’ and ‘Deliver Us From Evil’ (1982) before calling it a day in 1984. The darkish and slightly experimental sound of the seventies had changed into pure melodic metal with Shelley reaching big vocal heights while their new guitarist ‘Big’ John Thomas improved the world record of ‘how many scorching guitar solos can I put into each song at the time’, while drummer Steve Williams killed it behind his kit.

Janne Stark is a Swedish rock connoisseur, author and musician who has been in several bands and released albums with Constancia, Overdrive, Merryweather/Stark and Locomotive Breath. He was a big fan of Budgie and decided to record a tribute album entitled ‘Welcome To The Zoom Club’ in 2019. That album was focussed on the early years of Budgie when the band released six albums including ‘Budgie’, ‘Bandolier’, ‘Squawk’, ‘Never Turn Your Back On A Friend’ and ‘In For The Kill’. Released on the US label Grooveyard it did well enough for the label to endorse a second tribute that recently appeared under the title ‘Time To Remember’.

FOCUS ON THE EIGHTIES

‘Time To Remember’ has its focus on the eighties period of Budgie. Bandolier Kings is not only Janne Stark although he is the main force behind the project, also blues rocker Tony Spinner is heavily involved as singer and guitarist. And there is a whole cast of guest musicians involved including former Budgie guitarist Tony Bourge and even drummer Steve Wiliams who wrote some heart-warming liner notes while Bourge contributed some solos as well. The songs that are featured on this record come from the three albums and EP Budgie released in the eighties with the exception of the acoustic version of the song ,,Honey’’ that was from the very old days but never officially featured on an album (I believe it was the B-side of a single).

THE ESSENCE OF BUDGIE

Hearing this album, I am absolutely flabbergasted that Spinner and Stark have been able to capture the essence of Budgie to a T (once again). I am shocked in a positive way of how Spinner has sung here, he comes damn close to the voice of Burke Shelley. Even the high-pitched parts are done to perfection. Never even dared to dream that Tony Spinner could do this. Stark has done a stellar job in getting other musicians involved. On the guitar front people like Andy La Rocque, Michael Akesson, Stoney Curtis, Rowan Robertson, Don Mancuso and even label owner Joe Romagnola deliver quality and just as on the first tribute album Raven’s John Gallagher has two bass contributions on this one.

Stark has made the ultimate song selection for ‘Time To Remember’. All the monster songs are there with Obviously ‘Power Supply’ and the ‘If Swallowed…’ EP as the main providers, several tracks from ‘Nightflight’ and one from ‘Deliver Us From Evil’. It is a pure joy to hear tracks like ,,Panzer Division Destroyed’’, ,,Power Supply’’, ,,Secrets In My Head’’, ,,Apparatus’’, ,,I Turned To Stone’’, ,,Forearm Smash’’, ,,Crime Against The World’’, ,,Wild Fire’’, ,,Gunslinger’’, ,,She Used Me Up’’ and ,,Heavy Revolution’’ after so many years.

Bandolier Kings stay close to the original versions but it sounds really fresh and dynamic and there are tonnes of finger licking good guitar work to be heard on this album. All in all, a beautiful and hard rocking album. Janne Stark and Tony Spinner deserve all praise for their efforts. Fan of Budgie? You just got to hear this if you have half a brain. Pretty sure that Burke Shelley will be pretty pleased up there.