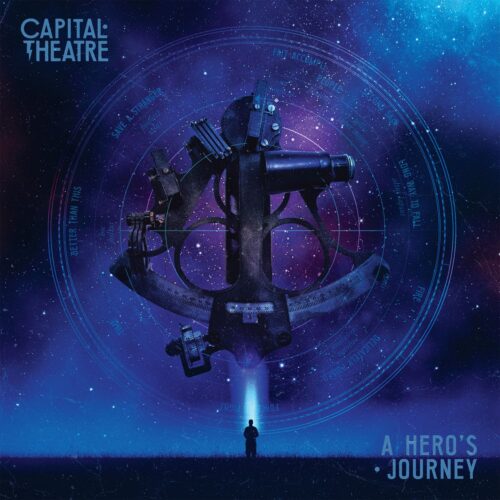 Drawing inspiration from Joseph Campbell’s comparative mythological book ‘The Hero With A Thousand Faces’ New Zealand’s trio Capital Theatre deliver a distinctive take on melodic progressive rock with their elusive debut album ‘A Hero’s Journey’. An album comprised of 10 evocative songs weaving together the concept born in the book. Edgy guitars and driven keyboard swirls elevate the songs with a final touch of strings arrangements delivered by composer David Campbell (The Rolling Stones, Beck), and a sterling production by awarded producer Mike Clink.

When ,,Faith Accompli” throbs into motion with pulsating keyboard and powerful driven drum rolls, Capital Theatre display the first glimpse of their sterling abilities. Vocal interaction is impressive and the melodic accolades are insane. It is as melodic as it is taunting and progressive. Adam Stevenson and Roy Oliver switch guitar duties frequently while Paul Reid lays down a solid and dynamic foundation underneath the song. The song whirls grandiose with the melody and chorus nesting instantly. Rooted in the experience of premature birth, the traumatic experience became first hand for Stevenson, fusing the lyrical content of Campbell’s book to the lyrics.

Keeping the songs pointy and full of appeal, the band moves into the driven ,,People”. The song’s bridge grips on the spot, and its melody is sterling. It is instant appeal needed lacking a returning chorus. Hammering a ponderous beat Reid creates enough sturm und drang to kick up serious dirt. Guitars are rich in tone and sturdy pull forward the song evolving around everyday life. Peeling back to the essence of life the band displays frailty on ,,Second Skin”, with its wonderful string arrangements and piano interaction, before breaking into the wonderful bridge and chorus. The song’s narrative is the question of how life treats us and mankind shedding skin or staying true to their roots.

There’s an intense turmoil created by the dynamic drums and whaling guitars that are powered up by the layers of strings, oozing despair with the question mark emphasized. Stevenson digs deep into his most vulnerable vocal delivery and touches the heart and soul more than once. It is one of those highlights on this amazing journey, finding its bold equal with the intensely driven ,,Long Way To Fall”. Wonderful dynamics and vocal interaction bring it to its swirling pompous chorus. It makes Saga’s most melodic moments collide with technical prog outbursts, both modern and intense.

Vocally it wells with emotion and power, while guitars fire wonderful short solos and captivating riffs. Running point, the riff of ,,Fire” is modern and borders with pop. Pulsating low end bass drones the song forward underneath the frail vocal delivery. Echoing light guitar scatters, reminiscent to U2’s The Edge’s finest moments. It evokes a light-footed jazzy trad, morphing over the dynamic drum patterns laid down.

There’s a synergy of pop and rock empowering the lyrics that touch the constant urge of temptation and enchantment. It finds accolades on the loud hauled ,,Delicately Poised”, switching delicate vocals and instrumentation with powerful welling emotions. Snare drums dominate the verbs, with the chorus towering. Powerful and delicate. Unravelling American Society on the following ,,Force To Fight” Capital Theatre switch registers. Reverb echoing guitars and tribal drum dynamics slowly morph it into a powerful rock track with outcalls and anger-laden lyrics. It is the band’s combustible new video single, that needs to be seen.

Throbbing bass and whammy guitars over polyrhythmic drum patterns inject discomfort in the driven ,,Time”. Live of be lived, finds its dynamics in the musical interaction. Melodic and perfectly aligning with the parallels of modern-day society and a possible end of the world proclaimed. Midway the song breaks for a piano section and serene string arrangements bedding the outline for Adam’s warm vocals calling out in melancholic tone. Gradually building back to form, the song evoles with insane melodics and great vocal interaction.

Echolyn comes to mind, yet breaks from the untouchable unique tone of Capital Theatre. ,,Better Than This” is another slower paced track with intense appeal. Its serenity touches deep, with great musical interaction executed. Much like Pink Floyd’s timeless classics, Capital Theatre manage to channel emotions both musically and lyrically. Meandering guitars and jaw dropping beautiful string arrangements align with the piano to pave the way for the vocals.

With Adam Stevenson at the helm the narrative finds an equal amount of sincerity crafted onto the intensifying music that keeps towering. It is masterful. Before we know it we’re at the end of ‘A Hero’s Journey’ with the band moving into ,,Save A Stranger”. The song tells the story of people stepping up to safe another’s life, while being close to becoming a victim themselves. Mega melodic with a glorious chorus the song blooms and adds the feelgood note to the tone of the album. Unmistakably the song stretches positive without lacking the critical note. This finds an equal melancholic narrative in the guitar-vocal execution in the middle of the song, before the guitar solo makes it orbit.

Capital Theatre delivers a prog rock highlight unmatched. Creating a musical storyboard towards the lyrical narrative, the band touches deep. The fine balance in arrangements is grandiose, and often refers to that of the mighty Floyd. Fine-tuned emotions channeled the music elevates the lyrics and with Stevenson at the helm the band has the right vocalist to belt this job. His range is pleasant and he comes across natural and emotive, perfectly adding to the warm atmosphere shifting.

Fragile at times, vulnerable in approach, the switch to power and heartfelt emotion is constantly lurking. It throws you off occasionally, but always finds a nesting comfort in the band’s well-crafted choruses. While Adam focuses on the vocal melodies, Oliver and Reid can zoom in on the multi layered vocals to pump up or emphasize the lyrics. Oliver also handles the guitar and paints sonic pictures that are powered up by the combusting drums and intense dynamics of Reid. The interaction is impressive and intense, putting a mark on this concept and memorable record.

The album is available on all major streaming services and can also be purchased as jewel case cd or on vinyl. There’s a regular black vinyl version as well as a blue vinyl edition matching the artwork of the album. Listen in and be amazed.