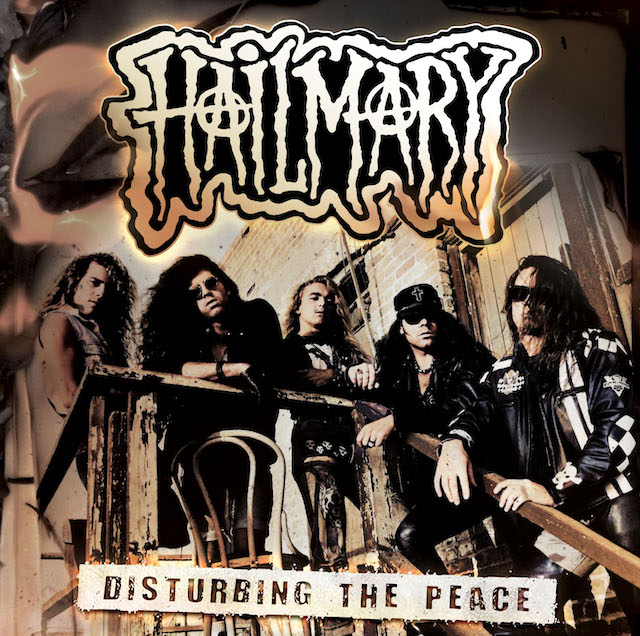 Remember the band Leatherwolf from Huntington Beach, California with their three guitarists line-up? If not, you might want to dive into the metal archives and discover their 1987 album ‘Leatherwolf’, their EP that started their career and was (later) released as a full album called ‘Endangered Species’ in 1985 or their most epic album ‘Street Ready’ that came out in 1989. After touring Europe things changed in the line-up as well as musically. Michael Olivieri (guitar/vocals, Carey Howe (guitar) and Geoffrey Gayer (guitar) got rid of their rhythm section and wanted to move on only to be stopped by one of their ex-colleagues who protested them carrying on under the moniker of Leatherwolf.

The trio hired new drummer Marco Forcone and bass player Patrick Guyton and a name change was due to avoid legal problems. The five guys started recording under the name HailMary and recorded an album with producer Tom Fletcher in 1991/1992. In that time also the grunge movement reared its head and disillusioned HailMary called it a day sometime later, leaving the recorded songs untouched, ready to gather dust. Come 1999 Leatherwolf reunited and released a live record called ‘Wide Open’. Two more albums followed but also numerous changes in the line-up. Until this day the band still exists with only Geoffrey Gayer still in the line-up from the old days but except for a live album ‘Unchained Live’ from 2013 no new material has been released, although rumour has it that a new studio-record is in the can.

If you are familiar with the early Leatherwolf albums I might suggest you check out ‘Disturbing The Peace’. The HailMary recordings that have been dusted off and are now officially being released. Although the eleven songs sound a bit outdated these days, they do remind me in a positive way of the early Leatherwolf days. Guitar driven songs, at times with bombastic vocals by Olivieri and tonnes of juicy guitarwork. ‘Disturbing The Peace’ is not an album that is going to cast full attention again on Leatherwolf, but it is a decent record that takes you back in time and to a band that was also an example and victim of a major record company not knowing how to market heavy rock music.