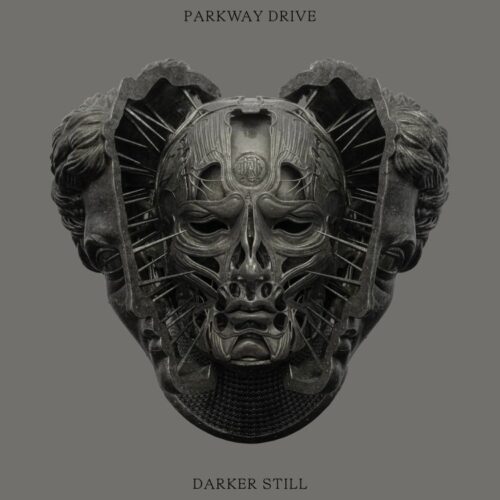 Parkway Drive has released its 7th album with ‘Darker Still’. An album that sounds surprisingly versatile, bold and fresh. While the band followed a metal-core direction in their early years musically, they shifted since 2015’s ‘Ire’ towards a more metal orientated sound. A move that clearly paid off.

The album kicks off at full power with ,,Ground Zero’’. This power is retained with ,,Like Napalm’’, ,,Glitch’’ and ,,The Greatest Fear’’. There are often subtle introductions to the songs, after which thick riffs are thrown through the speakers. Winston McCall (vocals), Luke Kilpatrick (guitar), Jeff Ling (guitar), Jia O’Connor (bass), and Ben Gordon (drums) apparently had a good time writing this album. There is a good dynamic between the verses and choruses, with a lot of attention for the melodic guitar lines, sing-along parts and the rough singing voice of Winston McCall. In addition, as a whole it is catchy as hell, so the tracks nest effortless in your head.

The cool mix of the album leaves nothing to be desired. So nothing to complain about in that department either. Title track ,,Darker Still’’ starts in a slow ballad way, with a heavy middle part, just to finish with whistling parts. ,,Imperial Heretic’’ is a nice mid tempo song, but also the prelude to the very mediocre ,,If A God Can Bleed’’. They completely lose me at that song. ,,Soul Bleach’’ on the other hand manages to pull me back in.

Unfortunately with ,,Stranger’’ follows the next miss of the album. A meaningless intro that has been pasted before ,,Land Of The Lost’’. Also a somewhat mediocre song for my taste.
The closing track ,,From The Heart Of The Darkness’’ is a more slow/midtempo song with heavy guitar riffs. But it also lacks the punch that the songs of the first half of the album have.

Fans of the band’s latest albums will have little to complain about. They continued this more metal oriented musical course. Fans of the more metal core direction will probably have a bit more trouble with this somewhat more mainstream direction of the band.

‘Darker Still’ has its brilliant moments, but also some musical misses. For Parkway Drive, however, that will not stand in the way, because the band is after all quite popular with their fans.