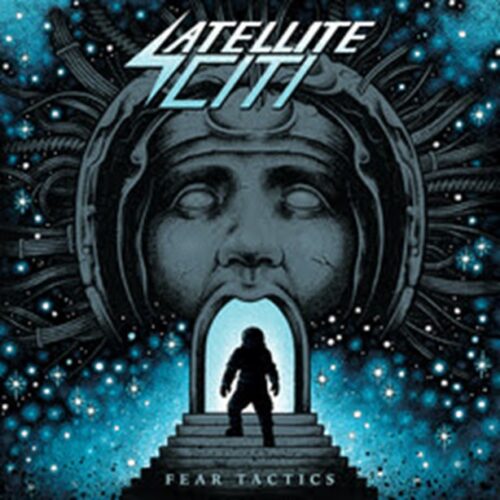 Suppressed by modern day mediocre media, hardrock is making its way back to the front ranks of music. Discarded by the masses, an underground following emerges and with the return of vinyl as prominent music carrier, contemporary rock is bound to breakthrough. Slowly gathering momentum, new and refreshing acts start to flourish by the dozen. Satellite Citi is one of those acts reviving the classic age and reigniting riffs to propel high potent rock songs.

Impressing with their futuristic stage show, drummer and vocalist Anna Gevorkian and her counterpart Shaunt Sulahian strike hard with the opening instrumental ,,Fear Is The Mind Killer” before going all in on ,,Getaway”. Anna’s solid rhythm and Shaunt’s dynamic riffs pull forward with drive. Anna’s vocals are modern and lean towards pop, if it wasn’t for the hard hitting and rough edge music demanding a more dominant rocking approach. It creates internal contractionary elegance working well. Though her appeal is radiant, it is Shaunt who pulls the musical vehicle with his hard-raving riffs and diverse playing. He switches the pedal board frequently to exchange tone and add chorus.

Dynamics are key here and Satellite Citi emphasizes it with appealing songs under supervision of producer Brad Wood for direction. An ,,Iron Man” – reminiscent riff pulls into ,,Black Magic” warping you back into the roaring seventies and with Anna taking the spotlight with great drum rhythms and breaks underneath her clear prominent vocals. Shaunt swings ,,Reaper” into action with orbiting riffs. Load and heavy it roars with attitude not scaring away from swearwords and bad mouthing. The organic transparent production adds the kick the tracks need with songs like ,,Awake” packing power and a throbbing ,,Smother” unravelling with intensity and thrive, as where ,,Miscommunication” pitches up the pace for an energetic sonic blast well captured. Transparency is key and the sonic output scatters with dynamics and reverb, making it largely enjoyable.

,,Empath” is the album’s breathing moment crafted around frail vocal interaction uttering before hitting a captivating strong chorus. The song increases appeal with strong slow pace and radiant vocal performances from both. ,,Lay Me Down” is another poisonous tune with vocal-guitar interaction hitting frontal before it explodes with great melodies and driving guitars. Crystal clear with Anna’s voice providing that poppy glimpse diversifying from modern rock ‘n roll bands operating in the same genre. Clear frail moment contradicting with the power she doses to set tracks ablaze. She juggles vocal duties as easily as Shaunt switches his pedal board changing register or adding effect to his wizardry.

‘Fear Tactics’ is the first full-length album from Satellite Citi clinging to the roots of hard rock and contemporary acts. It revives the music with a head on approach and the duo manages to implement a fresh effect with their impeccable deliverance. Being heralded by VoyageLA, Huff Post and New Noise as one of the genre’s hopefuls they find themselves backed for future breakthrough. And in all honesty: Satellite Citi deserves a spotlight to shine!