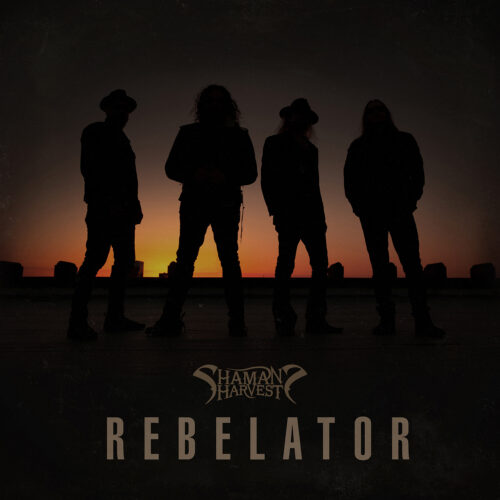 Hailing from the US state of Missouri and active for more than a quarter of a century already, four-piece outfit Shaman’s Harvest presents their seventh album ‘Rebelator’ and in my humble opinion they have delivered their best effort so far.

On ‘Rebelator’ singer Nathan Hunt, the guitarists Derrick Shipp and Josh Hamler (together with Hunt the only remaining original member) plus drummer Adam Zemanek are really mixing it up when you hear their musical adventures. Especially Hunt shows to be very versatile. He can be the relentless rocker throwing in power and reach but he can also be a gentle storyteller if he chooses to be. It also reflects the music of Shaman’s Harvest. The thirteen songs are first and fore most dominated by pure rock with a healthy dose of heavy guitars and a solid base of ‘rhythm and roll’.

The band really rocks on the first four songs of which ,,Voices’’ is very impressive indeed. The music has certainly an alternative vibe (listen to the beginning of ,,Wildfire’’ that turns into a beautiful rock song with a starring role for the voice of Nathan Hunt) and has that much variety that it is safe to say that ‘Rebelator’ has many hidden secrets which might take multiple listening sessions in order to discover, capture and enjoy them all. Add to that all a very robust yet melodic sound resulting in an album that rocks along nice and fairly hard but has a lot of subtle moments like ,,Mama’’. Maybe ‘Rebelator’ is better suited for the contemporary rock market perhaps. Still, show some courage and check out this intriguing album that has more to offer when you dive into it with an open mind. A fine and lasting album!