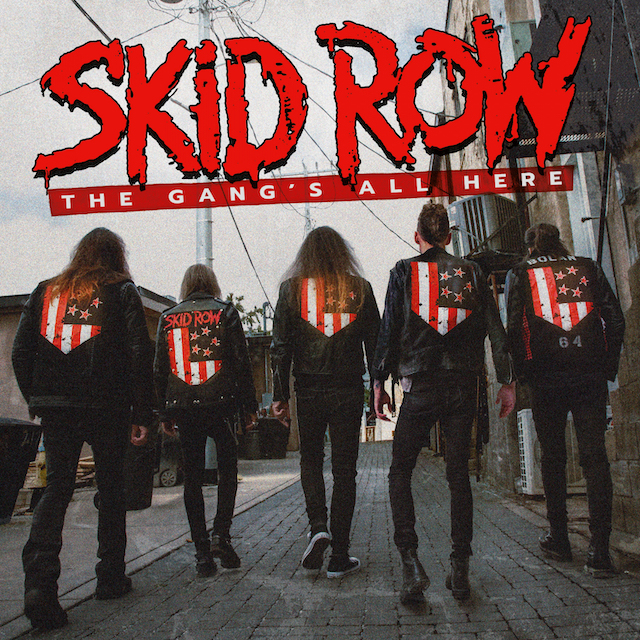 Former H.E.A.T vocalist Erik Grönwall has quite some boots to fill stepping up to take the helm for Skid Row. It’s interesting to read various comments on his live performances, but it is needless to say Grönwall delivers. Not touching the rawness and rampage of Bach, he focusses on a clean delivery, close to the original recordings. Yes, he belts the notes Bach let slip in order to convey the attitude of the songs rather than hit them. Sebastian set the new standards for the genre performing on edge with unmatched sleaze and swagger, breathing life into the lyrics rather than belting perfect vocals.

What becomes crystal clear is that Erik is by far the best vocalist for Skid Row, packing more live energy than all bandmembers together, unloading the right notes while at it.

`The Gang’s All Here’ is the first fruit of the reborn Skid’s labour, and it is especially interesting to hear how Erik holds up on tracks written towards his vocals.

We can’t discard the differences between Bach and Grönwall, and certainly not performing live, but the album makes instantly clear Skid Gröw elevates above the fold after years. Where `Thickskin’ and `Revolutions per Minute’ fell short on all accounts, the new album revives the band’s attitude and ‘f*ck all!’-appearance. `The Gang’s All Here’ fires on all engines, start to end. Action packed and melodic, powerful and sharp. The album runs like a runaway train on straight tracks.

Denser, the sound of the new album breaks differently. Award winning producer, and long-time fan of the band, Nick Raskulinecz turning the knobs to guard the perfect production matching the band and Erik. Transferring the same energy and grunt, he also brings a modern powerful density to the front.

,,Hell or High Water” immediately warps us back to Skid Row’s heydays. Pointy powerful riffs and Dave Sabo and Scotti Hill’s melodic interplay blast it forward. Rachel Bolan’s forceful pumping bass packs power and blasts the right dose of energy. Drummer Rob Hammersmith lays down a rock-solid foundation with great intensity and thrive, pushing the bands adrenaline surge skyward. All of this and more, is what Erik Grönwall injects. He hits the notes and discharges the energy of the band’s heydays. He is on par with Bach, without the growling raw vibrato. Hitting the breaks for a lush melodic section, the band and Erik expose their strength, and Snake and Hill’s solo is short and pointy.

Punkier the title track is opened by Bolan’s pushing bass line before the band goes into shout out vocal interaction with Erik. Punk and metal well in this energy bomb going off. Extended raw soling over the clockwork tight ticking riff, tremendous dynamic drumming, and Erik’s vocals pitching high and perfect, the song unloads.

Kicking out the grit is dirt grenade ,,Not Dead Yet” with its opening slide Americana. Clearly Erik injects his personal notes into this glorious outburst. High pitcher, some swagger-laden howls and growls, he pins his recent Leukaemia survival into the content. This is Erik’s most daunting and appealing vocal performance, and yes: it makes Bach (for the first time) sound rather bleak! (Can you imagine?!)

Energy unmatched the song is insanely dynamic and is pulled into the roaring ,,Time Bomb”. Blasting through your speakers, it is Bolan’s bass taking the spotlight, with the guitar tandem laying down a bottom end of scorching melodic riffs. The hook is impressive and Erik’s reverbing ‘tic, tic, tic, tic’ is ominously present, finding its detonation in the chorus going ‘Boom!’ with a howling blast. Grönwall switches registers constantly, drawing the raw high pitches from his toes while singing his @ss off with melodic powerful phrasing. The song’s groove is tremendous and takes us into the melodic power hymn ,,Resurrected”. Melodic nesting the song runs the straight tracks with the locomotive firing up its burners.

“…No one can bring us down, or push us underground” Erik roars with pristine towering melody, with the band belting out “…we’re resurrected!” the answer to his statement.

Scorching blunt is the opening riff of ,,Nowhere Fast”, with ominous presence and forceful drive. Erik’s vocals constructed on the driving drums, he breathes air into the dense dark atmosphere with an impressive melodic vocal delivery that pulls the song from the molasses-thick riff and bass interaction. ,,The Lights Come On” have Erik more isolated in the front, belting a melodic register with raw energy. He displays his most versatile performance, bordering with H.E.A.T’s most melodic live energy. His growls and tone frequently remind us of Bach while he walks an entirely different path in execution.

Pumping bass line and reverbing guitar hooks are laid down by Snake and Hill. The breakdown of the song is rip roaring, as is the opening of the pulsating groove-rocker ,,Tear It Down”, with its fist pumping anthemic chorus. Screeching solos and melodic accolades placed by Sabo and Hill, confirming their lifelong comradery discharging extraordinary guitar-interaction.

,,October’s Song” is one of those moments’ life halts. The melancholic sub notes found in the subtle plucking guitars and Bolan’s low-end droning bass. The track unloads melancholy in its chorus powering up towards Erik’s roaring vocals. It is the longest track in Skid Row’s discography, clocking in at 7 minutes, but it explores a sonic spectre previously unheard. Multiple solo spots and spots on all performances, Raskulinecz creates a staggering framework of sound. Skid Gröw’s Pièce de résistance!

SLAVE TO THE GRIND

,,World’s On Fire” makes the album go out with a loud rocking bang. Packing the ingredients of anger and despair of the last 2 years combined, the song soars with anger-laden riffs, hooks and vocals. Bridge and chorus amplify the content conveyed; “Turning away is just watching it burn”.

`The Gang’s All Here’ resurrects one of the boldest rocking metallic sleaze bands ever. The album packs tremendous energy, with tons of spunk and spit present. Watching the live performances, more than once I felt as if the original band members settled for less, contrasting enormously with their classic performances, but Erik has injected the precise amount of vim and vigour to resuscitate Skid’s career. Erik’s the right gunslinger to shoot sharp rounds, bringing a versatile and diverse vocal delivery to the front.

Downright impressive as a person and performer, he discharges the energy needed for a band back on top. Lucky for us the band picked up on it and the result is a blast of an album. A thundering freight train running rampage downhill, ready to take on the criticasters of the globe.

`The Gang’s All Here’ picks up where `Slave To The Grind’ left off, scorching the sonic airwaves!