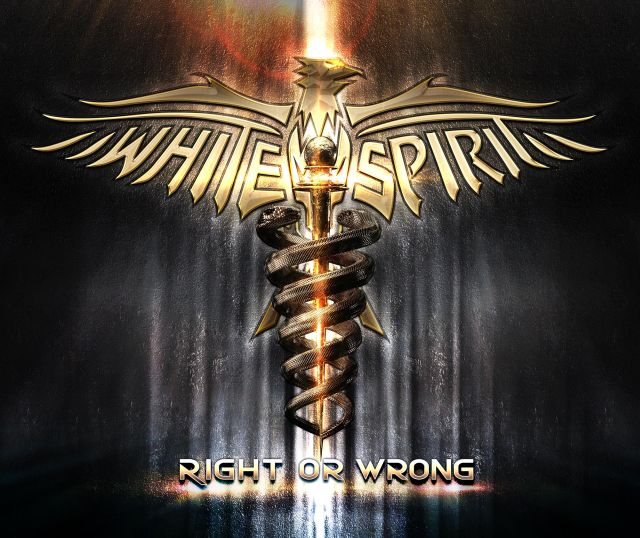 On May 6, 2020 singer Brian Howe (Ted Nugent and Bad Company) died from a heart attack at the age of just 66. The man had achieved mega success as the replacement of Paul Rodgers with Bad Company. He was a major factor behind the success of albums like ‘Holy Water’, ‘Dangerous Age’, ‘Fame And Fortune’ and ‘Here Comes Trouble’. Born in England Howe at one stage landed in the band White Spirit in the early eighties.

White Spirit was one of the bands active during the New Wave Of British Heavy Metal. After releasing a single called ,,Backs To The Grind’’ on the Newcastle based label Neat Records and some appearances on compilation albums White Spirit got snapped up by MCA and their debut album ‘White Spirit’ was certainly one of the better albums in 1980. Unfortunately for the band their guitarist Janick Gers received an offer from Ian Gillan to join his band Gillan replacing Bernie Tormé. Later on Gers, after Ian Gillan joined Black Sabbath for the ‘Born Again’ album, moved on to Iron Maiden where he still remains).

Singer Bruce Ruff also left the band as did bass player Phil Brady. Some of the replacements were guitarist Mick Tucker (now active in Tank) and Brian Howe. Together with the remaining members that included Malcolm Pearson on keyboards, White Spirit started working on their second album with Gillan-keyboardist Colin Towns as producer. For whatever reasons the album never got finished completely and White Spirit broke up. The musicians all went their own way.

Brian Howe headed to the good old USA where he received an offer to work with Ted Nugent recording the album ‘Penetrator’ in 1984. As Howe was only a hired hand (and on a weekly wage) for uncle Ted the ambitious singer decided to go for a solo career. But it was Mick Jones of Foreigner who introduced Brian to Mick Ralphs and Simon Kirke of Bad Company who were on the lookout for a replacement for a certain Paul Rodgers. Howe got the job and things went really well for the band. Their albums were very successful mainly because of the change in sound. With Howe’s melodic voice the band more or less became a combination of AOR and heavy rock. Howe also had a big hand in the compositions together with producer Terry Thomas, who was a key factor for Bad Company’s style and sound.

On a personal level things did not always work out between Howe and his band mates, as there were also financial disputes. In those days bands sold real records and Bad Company sold a lot, so there was big money involved. At one stage even Kansas-singer Steve Walsh was considered to replace Howe but record company Atlantic wanted Howe to stay as an album like ‘Holy Water’ was a huge seller. Somewhere in 1994 (some time after the release of ‘Here Comes Trouble’) Howe did leave Bad Company and went out on his own, stating that Bad Company had become lazy and sloppy and that he was sick of being criticised by Ralphs and Kirke for his efforts. The big days with Bad Company he could not match with his own records. Bad Company went on with Robert Hart replacing Howe and later on Paul Rodgers returned.

A day after Howe’s passing Mick Tucker and Malcolm Pearson had a conversation over the phone and they also talked about the tapes with the recordings of the second White Spirit record that had disappeared. A bit later Pearson while moving to France found them by accident in a drawer of an old bedside table. Together with Tucker he decided that it might be worthwhile to do something with those old tapes. Tucker involved his Tank mate Cliff Evans who has his own studio and label Conquest music. Evans started working on the tapes. It turned out to be a delicate process to transfer the tapes to a digital form but Cliff managed to save the bulk of the material.

As both Tucker and Pearson knew that the sound of then would not be appropriate in 2022, they decided to record the album again with bassist Neil Murray (former Whitesnake and Black Sabbath) and Uriah Heep drummer Russell Gilbrook, with Tucker on guitars and Pearson on keyboards. It turned out that Brian Howe’s vocals could not completely be saved so for four songs on the album they engaged Jeff Scott Soto and Lionheart vocalist Lee Small to sing two songs each. As a special tribute to Brian Howe it was decided to record a new version of the Bad Company hit ,,Holy Water’’ for which the duo engaged FM singer Steve Overland. The other five songs on the album have the original vocals from Brian Howe, recorded some four decades ago.

Re-recording bass, drums, guitar, keyboards and having JSS, Steve Overland and Lee Small singing five of the ten tracks has given ‘Right Or Wrong’ an up to date melodic sound that will put the name White Spirit into the limelight for the time being. Having the album mixed by HammerFall-guitarist Pontus Norgren has also had a positive influence on the end result as especially the guitar sound of Tucker is as sharp as a Swiss blade knife yet very melodic at times. Style wise ‘Right Or Wrong’ balances nicely between ballsy heavy rock and flashy AOR with plenty of strength and some really cool vocal arrangements (listen to the excellent choirs by Lee Small during the track ,,Better Watch Out’’ that has a lead vocal of JSS).  And how often can you hear an album with four aces singing? On ‘Right Or Wrong’ you can.

What about the vocals of Howe that have been saved? Well, when you listen closely you can already hear the writing on the wall that was to come for Bad Company after the leaving of Paul Rodgers. Howe has always had the perfect pipes for melodic rock and AOR and on ‘Right Or Wrong’ you can clearly hear the first features. And remember that his sessions were done four decades ago. I find it amazing that the production team for this record has managed to integrate these old recordings right into the mix quite accurately and made everything fit.

So, was it right or wrong for the duo Tucker/Pearson to rehash their past with White Spirit? For me they were definitely right doing it although it is a pity that the death of Brian Howe had to be the catapult or trigger (whatever you prefer) to get things going. It is a fine piece of work indeed.