Review | White Tygër – This Is The Life 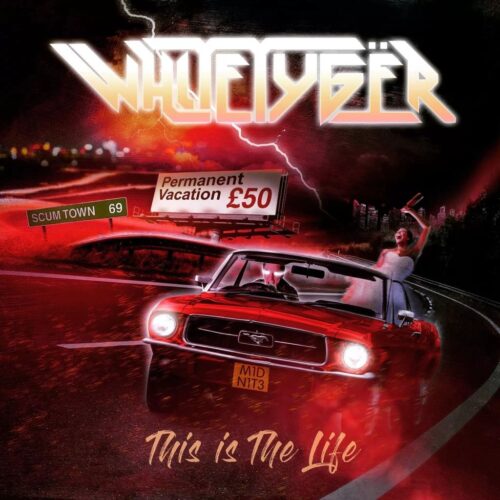 Review | White Tygër – This Is The Life

For a mere second, I thought back to the late Mark St. John’s White Tiger record. Just a second though as the album’s opening track is pitched to life by a scorching loud riff that sets the room on fire. White Tygër instantly impresses with their roaring glam and sleaze metal, reminiscent to Skid Row’s finest hours. And that is just what you need to expect.

,,Permanent Vacation” displays the heavy groove and ponderous drums making the Skid’s debut and 2nd album such memorable records. Their drive and pondering power are persisting, with scorching riffs electrifying the sky. Pitching high, the solo and song’s breakdown are equally memorable as raw spitting energy combusting ‘Slave To The Grind’.

Nip Tygër Turner and Chris Hingly manage to keep spitting fire with their rousing riffs and scattering wild solos. Jack Ryland Smith’s drumming is powerful and forceful, paving the way for Stu Timmins’ great powerhouse bass lines. The whole foundation is packing groove and drive, with energy firing off it. Nip however steals the show with his vocals that are close to Seb Bach’s finest vocal executions. He roars and grunts wild, without lacking the appeal needed to keep the fire burning, as proven on the driven ,,Heartbreak Hotel” with its powerhouse vocals and orbiting guitars. ,,Runaway Bride” keeps the pace high with Nip Tygër belting out his Bach-like vocals reminiscent to ,,Makin’ A Mess” but with the intensity and melodic appeal of hit machine Bon Jovi in their heydays.

Though it is fairly easy to draw up comparison, the music of White Tygër bears too much perfection to serve it off. The power and groove are exceptional and the band manages to draw up one hit after another, like a Heavy weight K.O. fight lasting 12 rounds. It is hit after hit with songs like the melodic rockers ,,Midnight Lovers” and slower paced ,,Forever And Always” making a big impression with its sticky chorus and hook. Ten and you’re out applies to the wonderful energy driven groover ,,Skum Town”, with Nip again delving deep, switching registers and belting a perfect job. “Let’s get ready to rumble!!!!…..”

It is the melodic opening of the title track that antes up the potion with tremendous drive and roaring vocals. It has a ravishing groove and downright great pace and chorus. The bridge already has you punching the air, but when the band reaches their pitch perfect chorus, you know you hold a remarkable album that will kill by K.O.. Pushing the pedal deeper into the metal, the band hits the compulsive driven ,,Speed Demon” spitting turmoil. Mega melodic and driven, with bad mouthing lyrics and appeal. The grit scatters off the edges with the bass throbbing loud and low. Drums kill it on the opening of ,,No Fucks Given” while Tygër roars loud and wild over the screaming guitars. Melodic and packing a punch the song hits the light before making the opponent going knock out in the breakdown of the song.

White Tygër unites the ultimate sleaze and grit from Skid Row and fuses it with Sleeze Beez’ slicker melodies. There’s a serious punch packed and the choruses are unloading tremendous slickness and majestic grandeur. It fuses the nastiest licks and heaviest of grooves with epic melodies and vocals, making a long-lasting impression. Put your eighties Skid Row, Mötley Crüe, Bon Jovi and Winger collections up for sale on Ebay and Discogs, because there is a new name in town.

Sleaze is back and it has a name: WHITE TYGËR!!