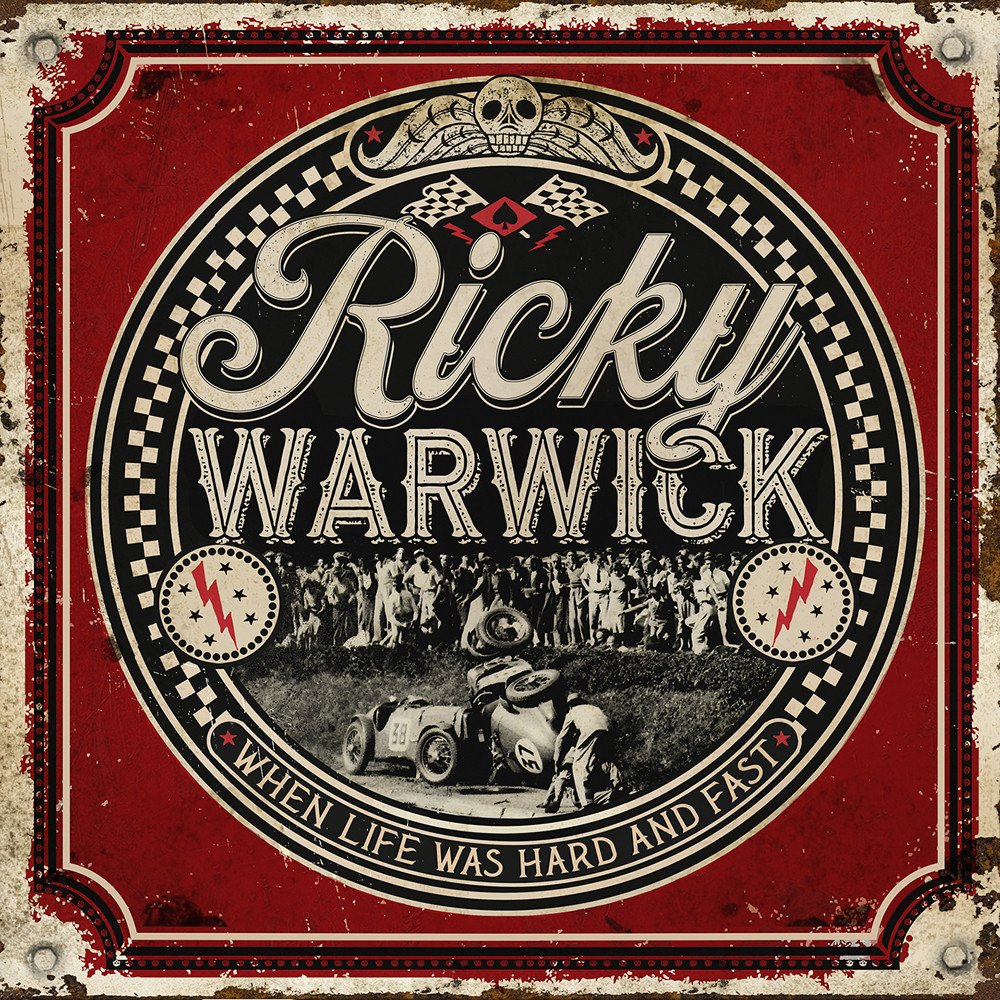 Quite often I let my wife listen to new stuff (whether she likes it or not….). I asked her: what do you think of this one? As soon as the first chords of the title track blasted through the speakers she said ‘that is Thin Lizzy’! Certainly not far from the truth that remark as Ricky Warwick is the current singer of Black Star Riders and he has sung in a reincarnated version of Thin Lizzy.

Warwick is no stranger in the business, born in Northern Ireland, moving to Scotland where he started The Almighty with several school friends. The Almighty was a band that always had excellent contacts in the music business landing a major deal and always managing to claim a spot as support of a big act. In Europe/The UK they did well but never broke through worldwide which was in a way understandable as their albums were nothing special in my opinion. Warwick has been doing okay throughout the years, staying active, releasing solo-albums, touring, acting and finally ending up working together with the great Scott Gorham who invited Warwick to join Thin Lizzy and later on the two continued to this date their partnership in Black Star Riders, a band that has kept improving their music album by album. Is ‘When Life Was Hard And Fast’ just a continuation of Black Star Riders and Thin Lizzy? There are certainly some similarities but on this record Mister Warwick proves that he has more to offer. For sure this is a high energy rock album where the songs are often fast, raunchy and uncomplicated (,,Gunslinger’’-a song written by Willy Deville and ,,You Don’t Love Me’’) but there are also a few pure rock and roll slightly punky tracks to be heard (,,Never Corner A Rat’’) and Warwick also tries towards the end of the CD to sound a bit more melancholic (the acoustic based ballad ,,Time Don’t Seem To Matter’’ and ,,Clown Of Misery’’, that unfortunately is not that good), ending the CD with an anthem (,,You’re My Rock N Roll’’) where again he shows his love for the old fashioned stuff. His main partner in crime on this CD is guitarist Keith Nelson who co-wrote and co-produced this record. There are guest roles for Thunder guitarist Luke Morley, Def Leppard singer Joe Elliott, Duran Duran guitarist Andy Taylor and keyboardist Dizzy Reed (Guns N’ Roses).

All in all not a bad effort by Ricky Warwick who also has some clips made for this record which can be viewed on You Tube, Ricky being dressed up as if has escaped from the set of the UK TV-series ‘Peaky Blinders’. There is a regular CD for sale with eleven songs but there is also a limited edition version. The second CD on the Ltd. version is pretty much acoustic based where Warwick covers a bunch of evergreens originally recorded by Elvis Presley, Johnny Cash, even Britney Spears (!), The Bobby Fuller Four (,,Fought The Law) and The Ramones. Warwick also looks back on his own past by recording an old The Almighty song and he dared to make an acoustic version of the Iron Maiden classic ,,Wrathchild’’. I wonder what Maiden boss Steve Harris thinks about this interpretation… Pretty gutsy move by the singer/guitarist. With this record it is not that Ricky Warwick is changing the musical world but even I, who has never been a fan of the man’s voice, will admit that ‘When Life Was Hard And Fast’ is a pretty cool effort indeed with a bunch of good songs, nicely executed in a classic manner.