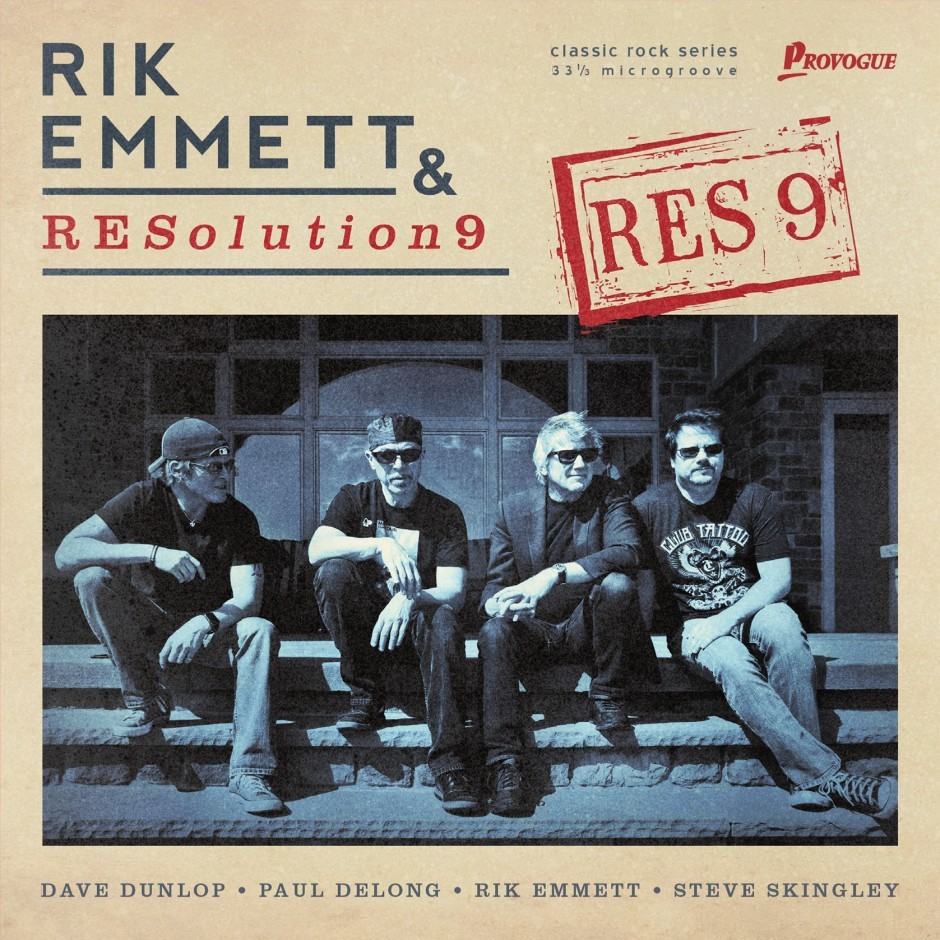 November 8, 2016 by Michel van de Moosdijk - More about our team

Some years ago Rik Emmett had to make a promise to his brother who was dying. Rik’s brother had only one wish: Rik had to reunite with his former Triumph buddies Gil Moore (drums/vocals) and Mike Levine (bass/keyboards). That happened and it resulted in a live CD/DVD recorded at Sweden Rock. After that it would have been logic that a studio CD would follow. But that has not happened yet. Rik has formed a new band called RESolution 9 with his working buddy Dave Dunlop (guitar), Steve Skingley (bass/keyboards) and drummer Paul DeLong and signed with Dutch label Provogue. The bulk of the material has been recorded at The Metal Works studio just outside Toronto, Canada, a complex that is owned by Gil Moore. Seeing Rik every day coming to work has brought the Triumph guys a bit closer again and it has resulted in a recording as well. Levine and Moore play with Rik on the track ,,Grand Parade’’, the last song of this CD. It is a bit in the style of ,,Suitcase Blues’’, the closing song on the Triumph CD ‘Just A Game’. If you listen close to the lyrics on this very laid back track you can hear Rik singing about the old days, reconnecting with old friends, sharing a laugh, shedding a tear and having a drink. Hopefully this will lead to a continuing working relationship in the future. But there is so much more in this CD. Rik has worked very close together with his band, writing the songs together, giving his musicians all the room they needed and it all has contributed to ‘Res 9’ being a beautiful CD. Opener ,,Stand Still’’ might made you think about ZZ Top when you hear the intro, but it soon turns into a fast rocker that could have been on any Triumph record when you hear Rik’s guitar belting it out in his own typical style and you analyse the construction of the song and compare that with old Triumph material. The first three songs (,,Stand Still’’, ,,Human Race’’ and ,,I Sing’’) all got guts and prove that Rik has not lost his rock roots at all. ,,My Cathedral’’ and ,,The Ghost Of Shadow Town’’ are more melodic, easy listening songs with special lyrical content as far Rik Emmet is concerned. Both tracks are just fantastic with Rik pouring a lot of emotion into his singing as well as his playing. There are guest roles for Rush guitarist Alex Lifeson and Dream Theater singer James LaBrie on several tracks. In fact almost the whole album is filled with good songs. The only song that is a bit disappointing is ,,Sweet Tooth’’, it just sounds a bit misplaced between the other songs. After he left Triumph Rik Emmett made several albums, but in one way or another they never made a lasting impression on me. ‘Res 9’ does, because Rik Emmett pours his soul out on this one, realising who he is and what he musically stands for. He rediscovered himself again on this one!