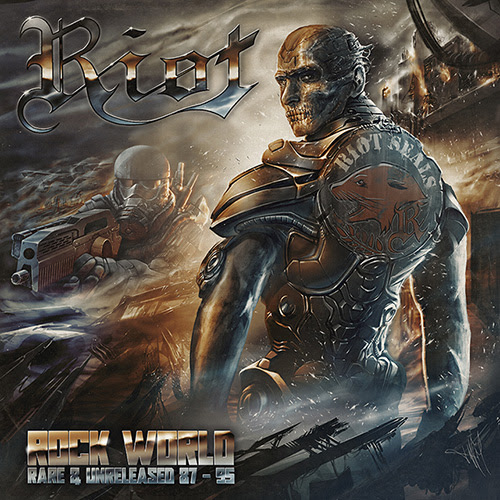 If you are into metal and have not heard of Riot (nowadays called Riot V) you surely have been asleep. The New York based outfit started out in 1975 and was founded by guitarist Mark Reale and featured singer Guy Speranza. The band did not have a lot of luck in their first years but their albums ‘Rock City’, ‘Narita’ and ‘Fire Down Under’ were and still are absolute classics and should be in your collection. Although there were many changes in the line-up Mark Reale kept being the driving force until he died on January 25, 2012 at the age of 57. Speranza also died in 2003. The last few years a couple of Riot compilation boxes have seen the light of day containing a lot of not so great sounding live material while several other members kept the band going since Reale’s death but changed the name to Riot V. Metal Blade has now come up with recordings that were in Mark Reale’s archives. A guy called Giles Lowery got the job to look at the archives, dig through them, listen to tapes, outtakes, demos and God knows what else. At the end of the day Metal Blade has been able to put an album together with lots of alternate versions, outtakes, early demos and even a few songs featuring Jag Panzer singer Harry ‘Tyrant’ Conklin who was considered for the front man position after Tony Moore left the band. With him a few songs were recorded (,,Medicine Man’’ and ,,Magic Maker’’, songs that were originally recorded with Moore just before his departure) as a try-out but after turning up drunk for his second Riot concert Conklin was sacked and Mike DiMeo got the job and recorded a handful of albums with Riot (including ‘Army Of One’, one of my favourite Riot albums). It is unfortunate that there were no more recordings with Speranza singing except for the opener on this CD ,,Rockworld Theme’’, a short song the band recorded for a TV show called Rockworld. When you look at the overall quality of the record it is obvious that you must be a bit lenient. Most recordings are demo tapes and the sound is not always perfect. But a real Riot fan will be happy with this release as it showcases in many tracks the quality of Reale as a guitarist and composer. Especially the instrumental outtakes are nothing to be sneezed at as are the three songs ,,Faded Hero’’, ,,Medicine Man’’ and ,,Magic Maker’’ that were put on demo with Tony Moore just before he left and was replaced by Mike DiMeo. I mean that the bulk of these recordings have never been heard before and that is the main strength of this album. It might not always sound superb but it is what is left of the musical inheritance of Mark Reale. Riot never really hit the big time status, they were close but after Guy Speranza left things went too much up and down for Mark Reale. Contributing fact was also that manager Steve Loeb who led the band for more than fifteen years did not always make the right decisions plus the problems the band had before ‘Fire Down Under’ was finally released did not help either. Add to that some style changes, the many changes in personnel and just not having any real luck. Loved and respected by many metal fans all over the world but at the end of the day Riot was a band that should have been much bigger than they actually became. So enjoy this compilation as it might be the last thing ever coming out. Riot V is still there, touring and recording but without Mark Reale…. No, that is not the real thing anymore, at least not for me.