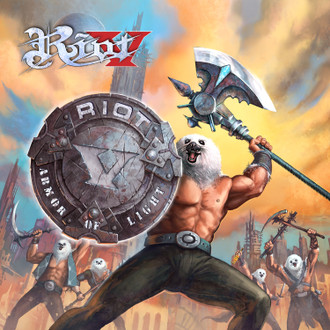 When the founder of Riot Mark Reale died in 2012 at the age of 56 as a tribute to him (and as requested by Reale’s family) several members of Riot decided to carry on changing the band name by adding a V and released the album ‘Unleash The Fire’ in 2014 with new singer Todd Michael Hall. Now about four years later a new album is there. It leaves me with mixed feelings as the music that bass player Don van Stavern, guitarist Mike Flyntz, the already mentioned mister Hall, drummer Frank Gilchriest and guitarist Nick Lee now make is based on Riot’s 1988 album ‘Thunder Steel’ when Riot for the occasion went direction power and speed metal. But that album has not been characteristic for Riot under the leadership of Mark Reale. So to claim that ‘Armor Of Light’ is in the old Riot tradition is just utter bullshit, it is not, far from. On ‘Armor Of Light’ the Riot V squad brings us fast and one dimensional power and speed metal with drums as fast as lightning, singer Hall trying to reach the sky with his high pitched vocals and Flyntz and Lee throwing around heavy riffs and solos. I do not hear anything at all that reminds me of albums like ‘Fire Down Under’, ‘Narita’, ‘Rock City’, ‘Restless Breed’, ‘The Brethren Of The Long House’, ‘Army Of One’ or ‘Born In America’. I can understand that the name Riot and the logo is still being used, but the music is different. Nowadays Riot V is a power/speed metal band, nothing more, nothing less. Having said that ‘Armor Of Light’ is as heavy as fuck, has some blistering guitars and does not sound bad at all, but the music has become one dimensional. There is not a lot of variety in the music, it is full throttle as you go. Nothing wrong with that but now Riot V just sounds like every other band in the genre and that is the big difference with the early days. Mark Reale had created a signature sound, it did not matter who was singing, you knew who it was. Now this is a dime in a dozen band. Not bad, I must say. If you prefer it full speed ahead ‘Armor Of Light’ is for sure your cup of tea.