ROBERT TEPPER-Better Than The Rest 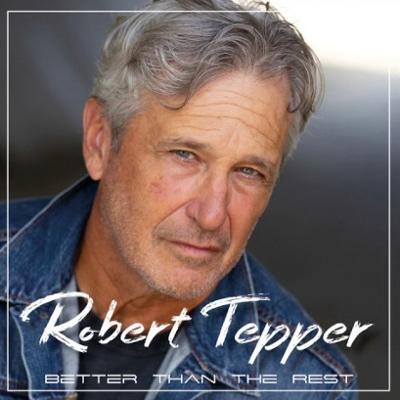 ROBERT TEPPER-Better Than The Rest

‘That guy looks a bit like Richard Gere’, is the remark my wife makes as I unpack the new Robert Tepper CD ‘Better Than The Rest’. Well, Tepper might show some resemblance with Richard but I know he can sing a lot better than the famous actor. Robert Tepper came into the limelight when Sylvester Stallone picked his song ,,No Easy Way Out’’ for the movie ‘Rocky IV’ and he scored a hit with that excellent song. Later Stallone used one of Tepper’s song for the film ‘Cobra’. Scotti Bros, at that time the label of Survivor, jumped right on it and signed Tepper but forgot to promote the two albums that he made for the label (‘No Easy Way Out’ and ‘Modern Madness’). Years later MTM released ‘No Rest For The Wounded Heart’ and in 2012 there was the acoustic based record ‘New Life Story’. During the years Tepper has been working as a song writer for other artists (he co-wrote the Benny Mardones hit ,,Into The Night’’) and working on soundtracks for movies. With ‘Better Than The Rest’ Robert Tepper more or less returns to his musical roots, producing slick and sophisticated AOR. You have several singers who have such a prolific sound and tone that you can recognise them anytime and anywhere. I am talking about people like Michael Bolton and the already mentioned Benny Mardones, guys with a certain huskiness in their voice that make them stand out from the rest. With his slight husky voice Robert Tepper certainly belongs to that category as well. Together with multi-instrumentalist/song writer Pablo Padilla, Tepper wrote and produced the album, also playing bass himself, making it a complete solo-effort with Padilla as his right hand man. The only thing about this album is that the drums have been programmed and that is something you hear. At times the drums sound monotonous but that is just a minor detail. The songs are all very smooth and easy on the ear. The voice of Tepper, who is way in his sixties now, has not suffered at all. He is still as good as he was in 1986, a singer that sounds good at every minute of the day. The songs themselves are okay, sometimes a tiny bit played on safe structure wise perhaps. The album could have done with one or two songs that could have jumped out. Something with the bite of ,,No Easy Way Out’’ perhaps but having said that ‘Better Than The Rest’ is of a constant quality, a record that will please fans of AOR and West Coast rock. Whether it is enough to bring the veteran singer back into the limelight remains to be seen but all in all ‘Better Than The Rest’ is a welcome sign of life of one of the most underrated AOR-singers ever.