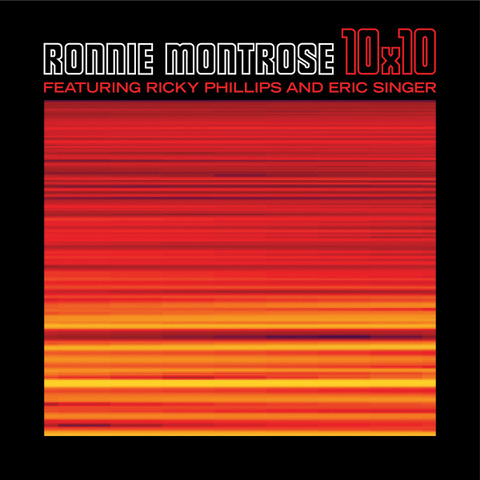 November 3, 2017 by Michel van de Moosdijk - More about our team

Before he died in March 2012 Ronnie Montrose had been working on some ideas and songs with bassist Ricky Phillips (Styx/Bad English) and drummer Eric Singer (Kiss). But the work was never finished as Montrose took his own life at the age of 64 suffering long term depression and he also had prostate cancer that he seemed to have beaten but possibly returned. A couple of weeks before he shot himself Montrose had lost a dear family member and his beloved bulldog which spiralled him into another depression and heavy drinking as he had done his whole life. Ronnie Montrose rose to fame after spells with Van Morrison, Bozz Scaggs and Edgar Winter with his own band Montrose and their 1973 record produced by Ted Templeman and with a young cocky singer called Sammy Hagar singing. After the album ‘Paper Money’ Hagar and Montrose (who was a controlling person in his day) both clashed. Hagar wanted to play guitar with the band and Montrose did not want that. So Hagar left (his story from then on should be known to you) and the band Montrose released another two albums that were not half as good as the ones with Hagar. After copping criticism for his 1978 instrumental solo album ‘Open Fire’ being too jazzy Ronnie Montrose met the Scotland born singer Davey Pattison and started the band Gamma. That group caused a musical revolution on the albums ‘Gamma 1’ and ‘Gamma 2’ combining synthesizers and guitars with Pattison’s dynamic vocals to a unique blend of never heard before rock. After three albums the band split and Ronnie Montrose started recording instrumental albums like for instance ‘The Speed Of Sound’ with music that could have been used as potential soundtracks for movies but were still heavy enough for the die hard rockers. During the years Montrose would work on projects, sometimes reuniting with Hagar for some shows, recorded a fourth Gamma CD (‘Gamma 4’) but more or less kept a low profile. Towards 2009 while touring he was diagnosed with prostate cancer. A few months before he died a show he did with The Ronnie Montrose Band he had started in 2011 was captured and later released on DVD, titled ‘Ronnie Montrose: Live At The Uptown’. When Montrose passed away Ricky Phillips with the blessing of Montrose’s widow saw it as his task to finish what he, Eric Singer and Montrose had started. The problem they faced at the time was a good singer so Montrose suggested to use different singers for the songs. That idea has been worked out by Ricky Phillips and old friends and fellow musicians came in to help out finishing this project. Singers like Glenn Hughes, Eric Martin, Tommy Shaw, Mark Farner (Grand Funk Railroad), Sammy Hagar, Davey Pattison, Bruce Turgon and Gregg Rolie helped out and some famous guitar players like Dave Meniketti, Steve Lukather, Phil Collen, Joe Bonamassa, Brad Whitford, Rick Derringer and Marc Bonilla stepped up to the plate as well, in order to finish this project. If you are familiar with the music that Ronnie Montrose played during his career you must have noticed that he primarily played heavy rock but mixed that up with some more experimental material. Ricky Phillips has managed to capture that on this CD. The bulk of the songs are pure heavy rock but the tracks sung by Edgar Winter (,,Love Is An Art’’) and ,,I’m Not Lying’’ (Gregg Rolie on vocals) show a different part of Ronnie Montrose. But don’t be afraid, there is enough rock and roll on this CD to satisfy you (,,Color Blind’’, ,,Heavy Traffic’’, ,,Strong Enough’’, ,,Still Singin’ With The Band’’). And people, do not underestimate the influence Montrose has had on rock music in general. The first Van Halen album was purely inspired by the 1973 Montrose debut album (the main reason that Sammy Hagar later joined Van Halen was the admiration of Eddie and Alex van Halen for that album. They even recruited Ted Templeman to produce the album) and even today bands still play and cover his tunes (latest example UFO covering ,,Rock Candy’’ on their CD ‘The Salentino Cuts’). Amazing that this CD has seen the light of day as it can be seen as a last outing of respect and admiration for the musician and the human being Ronnie Montrose.