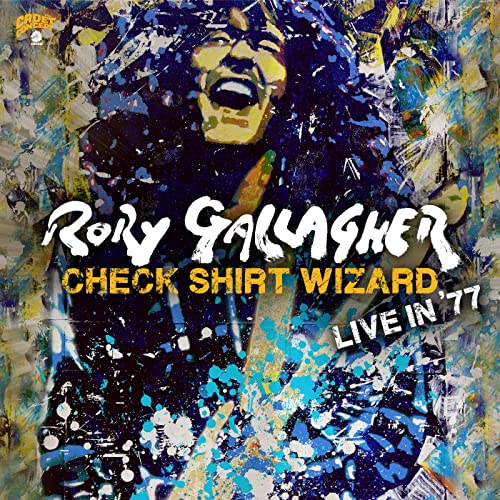 He might have died almost a quarter of a century ago but Irish blues rocker Rory Gallagher sure has not been forgotten. His brother Donal is the person looking after his musical heritage and whenever there is a new release you can bet your bottom dollar that the release is one hundred percent up to scratch. There are no dubious releases but well looked after records with great liner notes and pictures to match plus (the most important thing) immaculate music. Last year the 3-CD ‘Blues’ was already a unique and very worthwhile release and now we are dealing with the 2-CD ‘Check Shirt Wizard Live In ’77’. In the first months of 1977 Rory and his band consisting of bass player Gerry McAvoy, drummer Rod de’Ath and keyboardist Lou Martin toured in the UK promoting at that time the release of the studio-CD ‘Calling Card’ (co-produced by Deep Purple’s Roger Glover), a record where Rory had slightly changed his musical direction. The CD was a combination of blues and more heavy rock minded songs (like for instance ,,Moonchild’’) and it turned out to be the last one made in the above mentioned line-up. When Rory and band started working in San Francisco on the ‘Photo Finish’ album. At the end of the day Rory was not happy with the results, let Martin and de’Ath go and only recruited drummer Ted McKenna returning to a power trio format he once had with his old band Taste. The studio albums they recorded as trio (‘Photo Finish’ and ‘Top Priority’) are nowadays seen as Gallagher’s finest and everything was topped off with the insane live registration ‘Stage Struck’.

But let us talk here about what is in front of us. Recorded over various shows done in the months of January and February 1977 (a few concert tickets are displayed on the packaging of the 2-CD costing only a few Pounds Sterling in those days!) this outfit was smoking. Over two hours of steaming blues and melodic heavy rock is what is on offer here including the country blues acoustic session that was always part of a Rory Gallagher concert. There is something for everybody. The people that like his early seventies stuff with lots of blues and country blues and the people that are more into his heavier approach all get their fill. No less than eight ‘Calling Card’ songs can be heard on this honest live registration varying from the rockers ,,Moonchild’’, ,,Do You Read Me’’ and ,,Secret Agent’’ to the more country type track ,,Barley & Grape Rag’’ and the fast boogie type rocker ,,Country Mile’’ with scorching slide-guitar play from the master. There is also space for songs that in those days were a must for every Gallagher concert like ,,Tattoo’d Lady’’ and ,,Bullfrog Blues’’. This 2-CD is yet another statement of the class that Rory Gallagher displayed in that period, he was on his very best in that decade. It is such a shame that his career went down the drain after 1990. I had always hoped that when Gary Moore rose to fame with ‘Still Got The Blues’ that Rory Gallagher could sail with him on that cloud after releasing the album ‘Fresh Evidence’ in that same year. Instead he died 5 years later suffering complications after a liver transplant in a London hospital at the so young age of 47 years. Luckily Donal Gallagher keeps the memory of one of Ireland’s favourite sons alive with quality releases like ‘Check Shirt Wizard Live In ’77’. A man dressed in jeans, a check shirt, long hair, an old Stratocaster or Telecaster in hand doing what he does best: working hard on stage spreading the love for music among lots of people. A simple man but a musical wizard indeed.