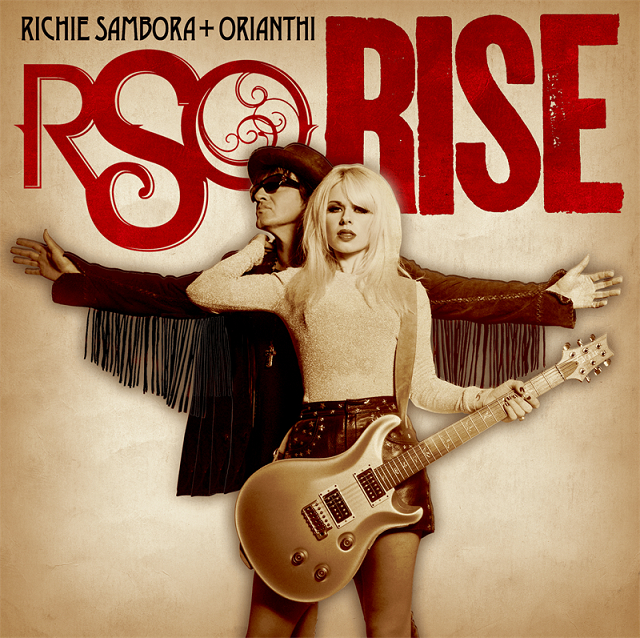 It’s been a while in the making. Ever since Richie Sambora teamed up with his current love Orianthi, the world was in for a treat. Both guitar greats joined hands onstage and now finally the long awaited first release from team RSO is released to the fans. Two styles unite for a 5-song introduction.

The title track draws you to the edge of your seat right of the pitch. Loud and ravishing riffs with raw and sparkling energy, fusing together Orianthi’s and Sambora’s styles. Two elaborate styles in playing as well as song writing, but both glueing to one another in an impressive manner. It’s the same adhesive that makes a happy couple, as we could witness front row during their extravagant live gigs. But it’s not only the generic styles of playing colliding on this EP, it’s also two vocal intensities as well as song writing skills. And all falls into place perfectly. The song has an arousing and celebrational character, perfectly cut to open their future gigs. Sambora’s gut drenched vocals lines up with Ori’s chants, but the symbiosis of both goes beyond imagination on the following ,,Masterpiece”. Modern rock with poppy touches and instrumentation, unlikely to be expected from these two musical celebrities. At first the song scared me away, but at second spin at had already nested deep inside my soul.  Slowly blooming it reveals more blues than it displayed at first glance. Piano power it up and when the Gibsons take over the song displays a captivating power. Piano which also draws us into the moody and tasteful ,,Truth’’ with staggering vocal interaction. Orianthi’s crystal clear voice lines up perfectly with Richie’s warm and soulful vocals. The song breathes honesty and touches deep, clearly depicting the deep feelings both cherish to one another. ,,Take Me’’ goes drum ‘n bass with modern beats taking over again. An almost jazzy underscore injected by the typical heartfelt passionate lyrics we know all to well from Sambora. It is exactly those lyrics and musical intentions that made his career orbit with Bon Jovi. His words spoken, his rhyme… it all oozes an intensity and sincerity not often heard in music. ,,Take Me For Who I Am…” sums it all up. ,,Good Times’’ is another feel good poppy tune that will likely scare away rockers at first, but it reveals so much passion and musical integrity it stands fiercely. Brass section, keyboard and country fiddling guitars with a lot of handclap and even a rap flying by, all combine into a singer songwriter like setting. Again the interaction stands fiercely tall and it’s delightful to hear the enjoyment and inspiration of both performers.

Perhaps this RSO album isn’t exactly on the right pages here, but both artists have such an intense and full rocking career behind their belts, it’s not more than obvious we feature their debut in a review. And all in all it also displays the musicians musical intellect and their wide varied tastes and style. Both, Orianthi and Richie’s typical styles of playing and song crafting, do sound remotely recognizable, but better not expect anything in their ordinary line of work. There’s a lot of warmth and inspiration radiating off the edges of this disc. RSO’s ,,Rise Up’’ will not be everyone’s cup of tea, but it is definitely drawing attention and likely their full record will be even more surprising.