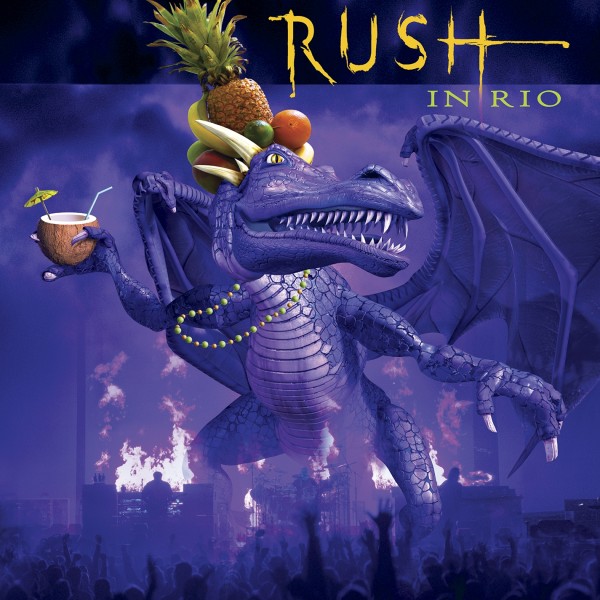 Narrowing in on the 80-euro mark upon its release, I had to curb my enthusiasm and withhold completing my Rush collection on vinyl. With the band disbanded unofficially, the stream of re-releases and special editions kept on hitting fans like tidal waves. With the anniversary marks met the band and management fulfilled a dying need of fans to dive deeper into their beloved band’s career. Many of the deluxe box sets certainly add value to your collection, but price tags are in the upper levels of my wallet. Especially the many Super Deluxe Editions of `Hemispheres’, `A Farewell To Kings’, `2112’ and the self-titled debut really make one dig deep. On the side vinyl editions are released of albums, which never saw the light of day in this format. One of these is this `Rush In Rio’ edition, that now finally landed on my doorstep.

The one thing I remembered vividly of this particular release, whether it was on DVD, Blu-ray or CD, was its imposing electricity hailing from the enthusiastic 40K audience at Rio’s gigantic Maracańa stadium. The noise from the crowd is so staggering it casted a mark upon the album and the visuals from the video enhanced the interaction. It was obvious this recording would surpass the clinical `Show Of Hands’ rendition and the `Different Stages’ albums by miles. It would even surpass the later live releases, though those most definitely benefit from the different approach this `Rush In Rio’ brought to the plate. It made band and production staffs realize the interaction of the trio with their audience was stretched further than during average concerts. This familiar bond, like stated previously, was the highlight of this monumental album.
Right off the pitch the interaction hits like a wall of enthusiasm. ,,Tom Sawyer” breaks the ice and with the acclaimed hit played as show opener, the band moves onto uncertain terrain. Judging afterwards, it was the best move ever made and immediately psyched the emotional and passionate Brazilian audience. Never played South America in their long spanning career the bad got shoved surprise after surprise. With the video in mind I recall the frequent exchange of smiles between al member and the fond moment the audience takes over ,,YYZ” morphing it from instrumental into lyrically mental is beyond words. Geddy looking at Lifeson with almost despair and fear in his eyes, as the wall of sound hits, is one of the most memorable moments of Rush history.
With the album on the turntable these memories vividly unfold and made me reach for the Blu-ray to rediscover. Now having said that, there’s one thing I have to rush to tell: this is the rawest and most full frontal energy packed recording available of the show. The vinyl punch is ravishing and the sound bar is raised, making all other formats cast off as reluctant. The power of the music and its raw edge, combined with the impossible overhaul of the audience adds so much more spit to the grooves, of which your needle picks up the enthusiasm instantly. It intense and multiple layers of underlying sounds and even a scratch of the cherished vinyl would do no harm to the experience (though it would leave me in tears).
With one of the strongest and most perfectly balanced setlists in Rush history, the band spits forward with great drive. It is clear Rush redefined their performing being and seized their momentum in Rio. The tour enrolled like a freight train and put Rush back on the top shelf of music.

The box set itself is a slick presentation with no less than 4 vinyl albums of 180 grams HI fidelity stereo quality. Weighing respectively 1kg, the box also features some extra full colour shots of the show and the shots come in more brightly and vividly exposed in correct format. It is by far the most impressive 4 album (gate)fold release I have ever encountered, the first one to my knowledge. All albums have a member featured as well as the labels are subsequently dubbed “Geddy’s Side, Neil’s Side, Alex’ Side, and Audience’s Side”; a neat addition to the exquisite and impressive presentation.
The quality records sticker is present to clear where the record actually is pressed. Also the album package features a download card.