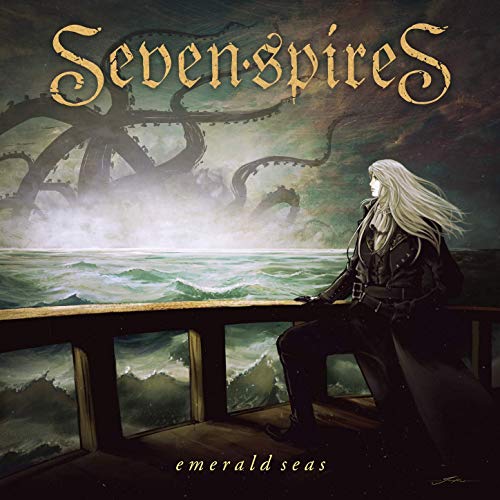 February 1, 2020 by Michel van de Moosdijk - More about our team

In all honesty I completely missed ‘Solveig’, the first album of this group that exists of musicians who all have a music degree it seems. That album came out in 2017 and had a concept. Singer Adrienne Cowan was the vocalist on the 2019 CD ‘Signs Of Wings’, the CD from Sascha Paeth’s Masters Of Ceremony and that is where I heard her remarkable voice for the first time. Paeth (who produced ‘Solveig’)” has also worked with the band on their second album and it is not a record for the faint hearted. ‘Emerald Seas’ continues the story of a lone sea captain who is on a quest for eternal life while being hunted by an ancient beast, battling with loneliness and other problems. The music of this band is remarkable, and that is quite a modest description I guess. Adrienne Cowan (also the main composer and playing keys) has this voice that is almost incredible. She can be an angel at one moment or the absolute devil the next. High, low, midrange, high pitched or pure grunting displaying an extreme manner of singing, it is all there mixed into the songs and she does it all herself. At times she sounds so god damn brutal (,,Drowner Of Worlds’’ and ,,Fearless’’ for instance) that you do believe it is a bloke belting out those brutal screams and grunts, but it is this tiny 24 year old girl that seems so fragile who brings it all to the table. Some songs might remind you of Nightwish or Within Temptation when Adrienne brings her angelic voice to the frontline but when she goes all out the music of Seven Spires is a combination of bombastic rock, melodic death metal and theatrical heavy metal. The other musicians are not to be ignored either. Guitarist Jack Kosto can be a shredder (the solo in ,,Succumb’’) or play the most deadly riffs while the rhythm section (Chris Davas on drums and Peter de Reyna on bass) is as versatile and solid as can be. Sometimes it seems that the band takes things over the top a bit but it just adds more flavour to the whole cocktail that Seven Spires has mixed together. Like I said this is not music for the faint hearted and several spins might be essential in order to understand and appreciate what this band is doing, as the arrangements and built up of the song material and the execution of the music are elements that need time to digest and comprehend. Chew on that one people and see if you can dig it!