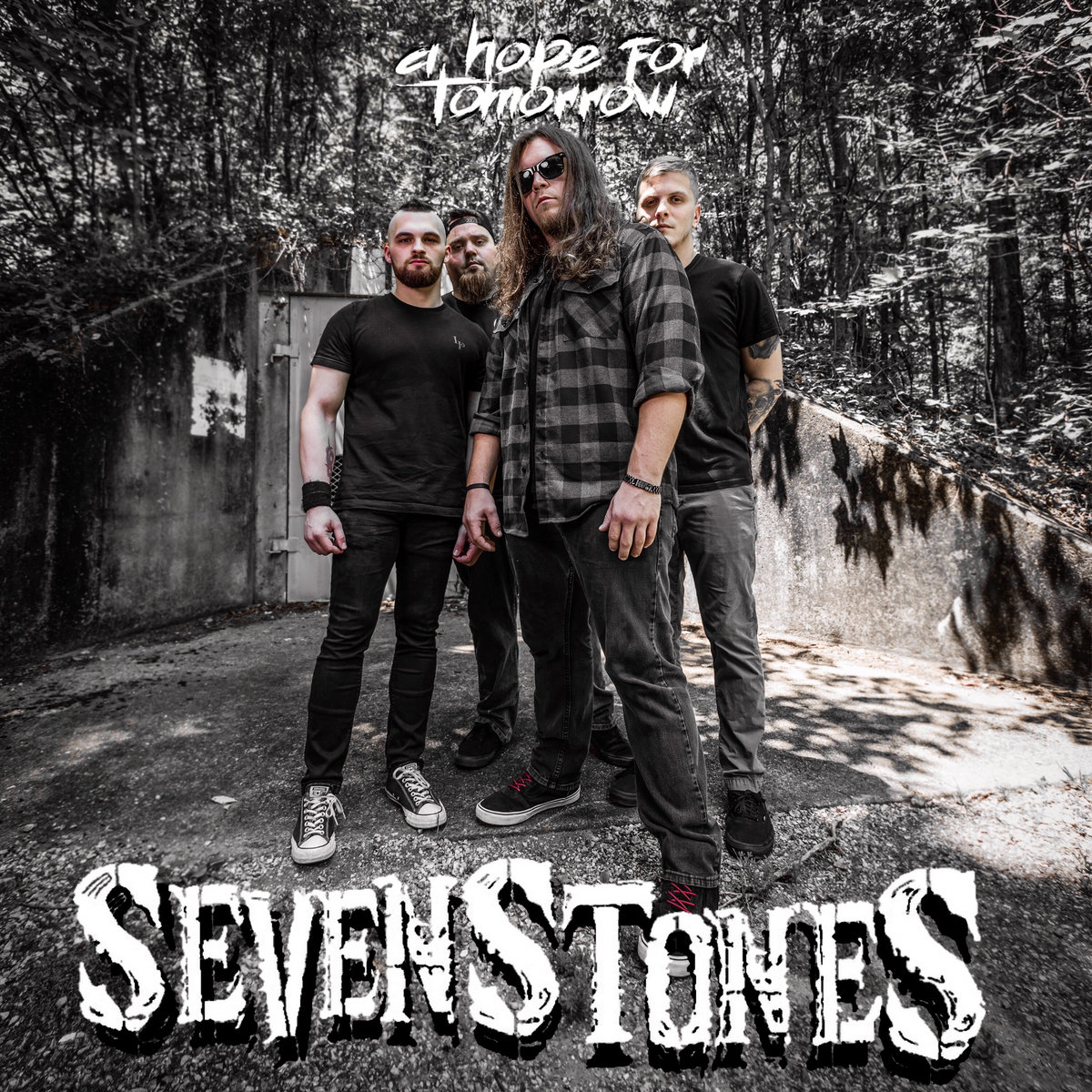 Wow, was I surprised and overblown by this release. SevenStones clearly means business with this first offering linking and fusing traditional rock and metal, injecting them with modern accolades. More than once I hear the band delve deep and touch the emotional nerve with heartfelt stride. Let’s introduce `A Hope For Tomorrow’, Chattanooga, TN’s newest loot on the metal tree.

Opened by the daunting riff pump intro ,,Gone” it rolls into the southern rock enticed ,,HellBent”. The song packs intense lows and is enhanced with a pulsating urge that is persistent and dominant. When it midway cracks open the blunt riff-drive, it pulls forward with time changing eludes and reveals a progressive side. Drums are as dynamic and dominant as the lashing guitars that frequently unload hovering solos while time changes again. Singer/guitar player Drew Elliott has a typical tone to his voice, which you need to get into. Soaring and midrange growling, he injects the band’s ripping sound with a frail yet heartfelt, somewhat disgruntled, overall feel. Just when you get up after being hit by the freight train ,,HellBent”, the band pours a bashing collection of decibels over you with ,,The Dying Kind” in which the vocals align less fluent. With the drummer taking the pace down and firing his double bass upon us the song dies out in awkward tiding. The discomfort casted is perfectly adding to the tracks lyrical content and when the distorted guitars and vocals call for ,,80 Proof” we get another side of the band revealed. More melodic, more sophisticated the song grips. The interaction between Abraham Montalvo and Elliot is impressive, pasting a solid wall of guitars. Again the versatile drumming of Marston is impeccable and fuses the tension. Though mainly social critical and lamenting with personal challenges, the band takes the lyrics also into lighter scales. ,,Drink Another One” rips clear from the tenure and inject the track with a semi-psychotic note. Meanwhile the turmoil casted is tremendous with Soundgarden (JC Pose) like stop ‘n go transcendence. More full forward rocking SevenStones bites with ,,Romeo” before hitting the ultimate heights with ,,Bottom Of A Bottle”. The song pulls forward with drum rolls over Americana-like fiddling before spiting flames on its chorus. Drew’s voice calls out from an emotional register perfectly matching the mood and lyrical content. Towering with double bass firing and an emotional solo, the song unloads grandiose power. ,,Into The Dark” picks up from the intimacy of the previous track, with acoustic guitars. Much like Blacktop Mojo it makes classic rock elements from the 70s blend with modern southern rock notes. Emotionally it tings forward with Elliott calling out mid way when the song explodes with towering loudness. The intensity is gripping and delving into the following ,,Soulless” the band evolves in ominous tendencies. Roaring with echoing guitars, the track opens to unload mythical power. Aycock plucks his bass and the drum patterns again are multi dimensional. Fierce and monstrous loud riffs propel the metal vehicle forward with intense drive. Contrasting from the root of their sound SevenStones go acoustic again and challenges Allison Hasty in a duet. Though it oozes comfort, the song also features a sinister outline with string arrangements added. The title track emulates flannel-jeans grunge in its opening, before shooting into orbit with excellent melodies, both vocally and musically. More daunting is the album closer ,,All My Life” with its repetitive drum rolls emphasizing the turmoil spit in the lyrics. Guitars are ravishing, somewhat whammy, pulling forward underneath emotive vocals. The song unexpectedly spits gravel and shoots forward towards the end, much like Pantera they spawn a furious riff as the album’s dying notes.

SevenStones features a genuine organic sound and oozes great appeal. Though ,`A Hope For Tomorrow’ displays a promising band on the rise, production-wise the tracks could use a little input from outside in. The band has a stubborn uniqueness to it and will surely evolve. `A Hope for Tomorrow” definitely made me happy and I will keep an eye out for them…. Listen in!