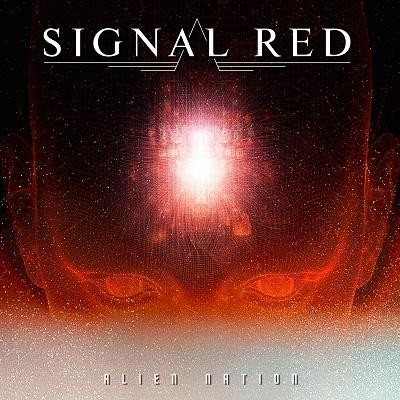 December 5, 2020 by Michel van de Moosdijk - More about our team

The second CD of UK formation Signal Red sounds to me like a very logical follow up of their 2018 debut ‘Under The Radar’. There are some very seasoned musicians at work here. The singer Lee Small is in a league of his own. Especially the latest Lionheart album ‘The Reality Of Miracles’ was a singing master class by Lee Small, so in that department Signal Red is sitting pretty. Guitarist Steve Grocott is the man behind the music, composing the songs while Lee Small penned down all the lyrics. Grocott (who you might know from the formation Ten) is also responsible for playing keyboards. Signal Red is a two man act with outside help from Steve Newman on the bass guitar, backing vocals and functioning together with Grocott as producer. Daniel Zaman provided drums.

‘Alien Nation’ is a melodic and most of the time up-tempo heavy rock record that starts off extremely strong with ,,Wide Awake In Dreamland’’ and the hard rocking track ,,Email To God’’. It turns out that ‘Alien Nation’ is a pretty versatile album as well and although not every song is up to scratch I must say that it has been an entertaining affair of about 53 minutes listening to this record. If you are familiar with ‘Under The Radar’ I suppose the real surprise might have faded a bit as this material sounds like a logical progression, but this is nevertheless a good record. Especially the singing of Small is excellent and several songs have some nice arrangements and mood swings (like for instance ,,Dance Macabre’’. For sure an album that will please a fan of the melodic genre with its twist and turns and (most of the time) up-tempo character. I suppose if you are into the formation Magnum you should listen to Signal Red as well. There are several similarities there but it would go way too far to say that Signal Red is a copycat. That is certainly not the case.