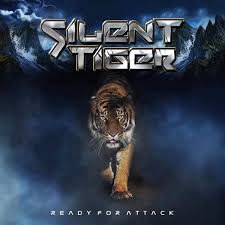 Silent Tiger is an initiative from guitarist Jean Funes (Sounds Of Eternity) and drummer Joel Mejia (Hearts On Fire). I have the suspicion that the people of the record label hooked the duo up with American singer David Cagle (who last year made a good record with guitarist JK Northrup) as David is a voice for hire. Further involved were bass player Andreas Passmark, keyboardist Jonas Oijvali and the one and only Dennis Ward (Magnum, Gus G, Khymera) on keyboards and mixing duties. Jean and Joel did the production. Maybe there was not enough budget to let Dennis Ward do the whole project, I don’t know but fact is that this record on the production side has a certain flatness. A bit more spark would have been welcome but for the rest ‘Ready For Attack’ is a very decent melodic rock/AOR record. David Cagle really is the man shining on this CD, the music is okay though not spectacular, but the vocals are nothing to be sneezed at. The immaculate singing of David Cagle lifts things up in the most positive manner imaginable. It might sound weird but the whole album reminds me every now and then of any of the Khymera albums that Ward sang on and produced. The material and sound are in that vein except that the total sound is not as sparkling as I had expected. The songs are adequate yet not spectacular although there some exceptions there that are positive, like the up-tempo rocker ,,Come To Me’’, with some guitar acrobatics from Funes or the also very energetic title track. Fact is that Silent Tiger and their album at first leave not a lasting impression but the more I have been listening to it the more I begin to like it. That still leaves the fact that Funes and Mejia should have left the production in more capable hands as now ‘Ready For Attack’ is a decent heavy rock/AOR album that could have been better than is the case now.