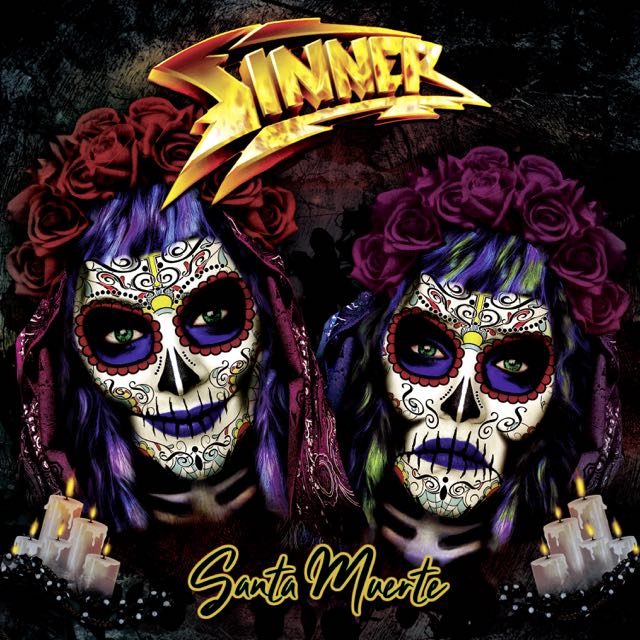 Mat Sinner pledges allegiance with the Mexican Saint Santa Muerte on his band’s brand new album. Nuestra Señora de la Santa Muerte, the Lady of the Holy Death, protector of transcendence to the afterlife, widely appeals due to the commemoration of the annual ‘Day of the Dead’ during which followers face paint skeletons and dress in vivid robes. The Vatican condemns the cult as much as I condemn the stagnancy of Sinner’s last releases. True; all albums are solid and proud rock releases, but they’re too much stuck in a hard rocking safe haven. Let’s see if the admiration of Santa Muerte brings Sinner back to life.

Holy crapshoot!
Right off the bat Mat and his metal machine unleash their fluent hard rocking metal potion onto the listener. Though apparently nothing has changed, the music rocks forward with the typical Sinner ingredients, which can’t be discarded. But it is the surprise that hits you with severe force. Not the low register of Matt roars from your speakers this time, but it is second vocalist Giorgia Colleluori who injects newfound élan. The Venetian metal vocalist claimed fame with her band Eternal Idol before joining the ranks of Rock Meets Classic, the annual festival touring to sold out arenas all over Europe. The concept fuses rock’s most elusive tracks performed by the Bohemian Symphony Orchestra and the Mat Sinner band alongside those responsible for making those hits famous in the first place. This is where Mat was introduced to the impressive range of Giorgia who immediately puts a mark on the opening track ,,Shine On”. She packs power and versatility, injecting the strumming metal tune with the right finesse to lift it up. Belting an impressive job she switches between registers fluently adding the extra dimension Sinner needs. Moving forward more melodic on the following ,,Fiesta Y Copas” Mat brings in his first guest, Ronnie Romero (Lords of Black, Rainbow). The song is a slick track with Romero not adding to much extra grace. Roaring bass riffs take us into the title track featuring Mat’s typical growling vocals. A mega melodic chorus gives the song face, especially with Giorgia adding her vocals increasing flamboyance and flair. Underneath the song tics like a Swiss clockwork and guitar tandem Naumann and Schollp lay down elegant solos and adroit interaction. ,,Last Exit Hell” emphasizes the guitarists’ furore as both slice down heavy chops and alternate in delicate solos, giving the fierce double bass propelled track tremendous drive and spectacular depth. The song anchors deep in Sinner’s back catalogue, but diversifies with Colleluori adding her charismatic voice to Mat’s power roars. The interaction is sublime. ,,What Went Wrong’’ features Mat’s next guest Ricky Warwick (Thin Lizzy, Black Star Riders), also not adding too much to Sinner. The track packs typical Thin Lizzy dual guitar melodies but lyrically and vocally fails to launch with Warwick completely out of place. Again: add Colleluori and you have a nesting hit on your hands Mat!
Proving the craftsmanship of previous track’s infringing Lizzy twin melodies, my statement on Warwick versus Giorgia is immediately met with proof as she adds the needed spit to ,,Lucky 13”, adding attitude and a little loud mouthing. The guitar melodies are impressive and line up perfectly with the vocal line. Unexpectedly Sinner turns bluesy on the classic ,,Death Letter” with exquisite instrumentation and slide guitars added by Magnus Karlsson, and Colleluori really delving deep. Tapping the vein she roars with Beth Hart-like power and finesse, shifting between soul and blues, adding impressive charisma and swagger. Less bluesy but evenly appealing is the slow paced ,,Misty Mountain” with its Americana guitar line and power unloading chorus. Larger than life it towers with Giorgia drawing from her widest range. These are rare but interesting moments after which Sinner revives the Lizzy vibe once again on the impressive Sinner-sung ,,Craving”. Likely one of Mat’s best vocal performances, given extra glance by the supporting vocal line of Giorgia. More classic rocking forward is ,,The Wolf” with reversed vocal delivery from both. ,,The Balls of Jack” has a distinguished Celtic sub note and great guitar interaction with both vocalists adding to one another’s poise perfectly. The song flowers with a cinematic warm chorus of glorious pretention. The Celtic sub notes are keenly injected and are picked up in the opening of the following ,,Stormy Night” that suddenly shoots into gear and features Giorgia and Mat delving deep over the intense melody frequently unloading with a hovering riff. ,,Sorry” is the featured bonus track on exclusive versions of the album. Mat’s growling and snarling, balancing crystal clear vocals of Colleluori on this intense metal ballad. The song packs great interaction and orbits with warm melodies and ditto chorus. Stripped down to its bear essence the organic production adds to the deliverance.

`Santa Muerte’ links to the band’s 2017 predecessor `Tequila Suicide’ only by art and the fact it is a Sinner release. The big difference however is the eminent impact of new vocalist Giorgia who adds lustre and versatility to the sturdy rocking metal of the band. This extra layer is profound and the album would have benefitted from a wider use of her potential. Mat sticking to his bass and background supporting his new vocalist will instantly increase the band’s appeal. Both guest vocalists don’t add to the album, which could have benefitted from more spotlights on the right star of the release. `Santa Muerte’ is a first step into the future with Sinner firing on all engines. Very promising and sincere album with high potential and impressive song writing and musical marksmanship.