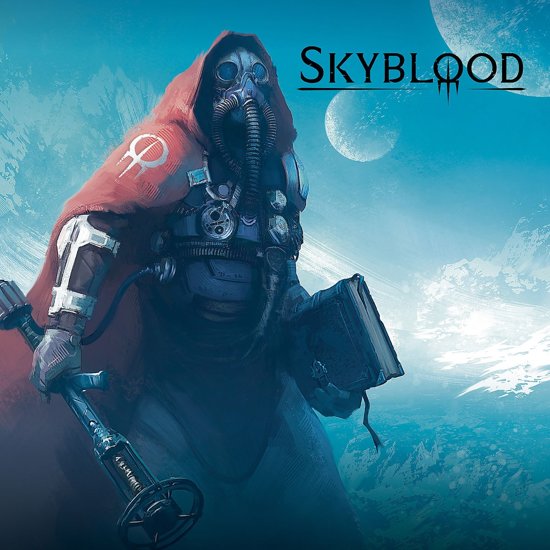 After about three decades in the business where he worked with bands like Swedish Erotica, Treat, At Vance, Krux, Therion, Yngwie Malmsteen and Candlemass (and I did not mention a bunch of other bands and projects) Swedish singer Mats Leven has finally made his first solo-album under the banner Skyblood. With a helping hand from experienced musicians like Snowy Shaw, Petter Karlsson, Nalle Pahlsson and Opeth drummer Martin Axenrot you would expect Mats to come up with an album on which you hear a combination of all the bands and projects above mentioned but that is not completely the case. Leven has gone more experimental, dark and even at times (very slightly) industrial in the nine songs that are featured on this record with the ten minute closer ,,Le Venimeux’’ as the most prolific and striking song. After hearing this album for a few weeks now I still have trouble understanding what Mats Leven is trying to achieve with this record. His vocals are dark, mysterious and at times completely different from his other work that he did during the years. For sure Mats has taken a risk by making an album that the regular rocker or the doom fanatic will find hard to understand as ‘Skyblood’ hardly ever refers to his past. Does that mean that ‘Skyblood’ is a bad CD? No, it is just an album with a complete different direction, but what that specific direction is, only Mats Leven knows. There is nothing wrong with trying something different but I cannot imagine that even fans of his Candlemass or Therion days, let alone a fan of Treat or Swedish Erotica will recognise Mats here. He has made a complete 360 degrees turn by manufacturing a dark, mystic and experimental record. I admire him for having the guts to completely go against the grain but I wonder who will have the patience and the stamina to get into ‘Skyblood’. For sure an album that is different than the rest and one that will not floor you from the beginning. Mixed feelings galore….