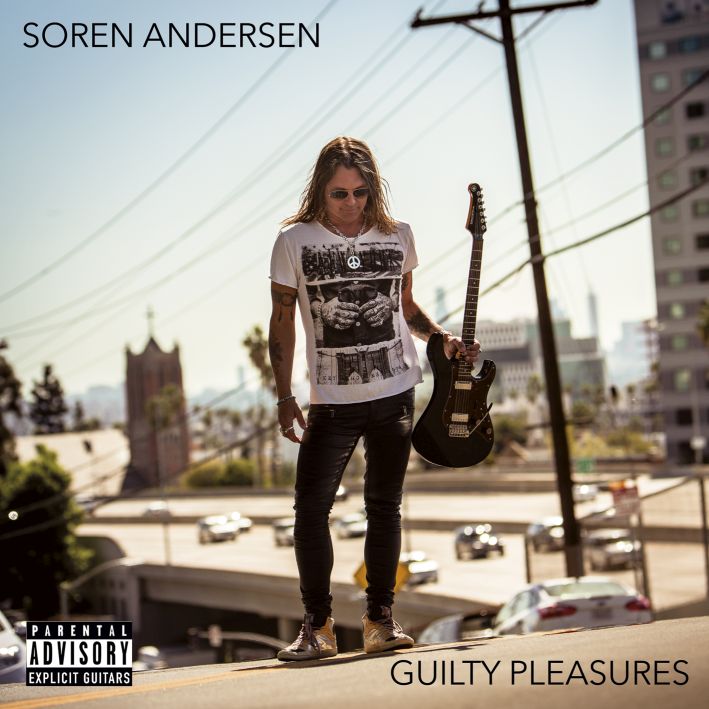 When you think about guitarists who have made an enormous impact on the rock world with their instrumental adventures I think about people like Steve Vai, Paul Gilbert, Joe Satriani and Ronnie Montrose (RIP). All musicians that have really added something different and vital to instrumental rock music. For Danish guitarist/producer/composer and studio owner Soren Andersen it was a lifelong dream to create his own instrumental album. He has worked on that for quite some time. Soren has worked with various artists throughout his career. He was heavily involved with Glenn Hughes, recording and touring with The Voice of Rock, he worked with bassist Marco Mendoza on an album and he released some of his own stuff as well. Also Mike Tramp is a guy that has had musical encounters with Soren. It is not strange that some musicians have repaid Soren’s work by now assisting him with ‘Guilty Pleasures’. Glenn Hughes, drummer Chad Smith (Red Hot Chilli Peppers) and Marco Mendoza helped out on ‘Guilty Pleasures’ and if you are a guitar freak who can’t get enough of this kind of material it might be very wise if you investigate ‘Guilty Pleasures’. Although Soren claims that he does not even operate or belong in the same league as Vai and Satriani (modesty is a real virtue) I dare to say that on the ten tracks that are featured on ‘Guilty Pleasures’ he comes close, damn close! He is a virtuoso on the six strings but is a musician that puts the song and the theme of the song first. His playing is first and foremost functional yet spectacular at the same time. In a way it is old school classic guitar rock and metal but served with a very modern production technique giving the ten songs room to breathe and to flourish. On the ‘Resonate’ album that Glenn Hughes released a while ago the playing of Andersen was already spectacular and for his own album he just upped himself a bit further with cool themes, scorching solos and at time very subtle intermezzos. ,,Satori’’ is a beautiful ballad while the bass line that is feeding ,,Agent Wells’’ is just epic. The tempo of the record is pretty constant, yet there is plenty of variation in sound, tone and production. Instrumental albums sometimes sound a bit monotonous after a few songs but that is not the case here, far from. This is an instrumental rock and melodic metal album that keeps you interested from start to finish and most of the time captivated as well. Check this one out if the above mentioned artists are to your liking because Soren Andersen is giving them a run for their money with ‘Guilty Pleasures’.