SPREAD EAGLE Subway To The Stars 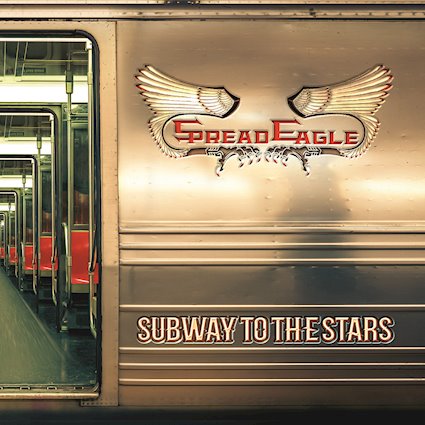 SPREAD EAGLE Subway To The Stars

Originally from New York I bumped into some guys from Spread Eagle back in 1989 while visiting The Foundation Forum in Los Angeles, in those days a perfect stage for musicians, bands, managers, booking agents, press and other media to meet up for interviews, clinics etcetera. I was sharing the same hotel as the boys from Spread Eagle whose debut-CD was just about to come out and they were there to do promotion for it. Very down to earth musicians who were full of hope for the future as they had signed with a major company MCA and their album ‘Spread Eagle’ was hopefully going to make a dent in the glam rock and heavy rock scene that was popular in those days with bands like Poison, Guns N’ Roses and all the other usual suspects. The first and second album ‘Open To The Public’ (released in 1993) were not bad but did not lead to major success so around 1995 the band broke up only to come together again in 2006 with the original members Ray West (vocals) and bass player Rob De Luca. They have been together ever since without releasing any new stuff. These days Ray and Rob are accompanied by drummer Ric De Luca (Rob’s nephew) and guitarist Ziv Shalev. They have been working on the third CD for some years now and in the meantime participated in other bands and projects. Rob for instance has been for years playing bass with UFO who are still busy with their last tour. You can hear that Spread Eagle has been working a while on this album. The songs are hard edged rock, with a lot of crunch and at moments it is like listening to the first album again. Style wise not much has changed but the songs are much more nature nowadays and you can’t say that this is glam rock at all. Spread Eagle is a very decent traditional heavy rock band these days with some really aggressive rock songs like for instance ,,Sound Of Speed’’ (with excellent guitar work from Shalev) and ,,29th Of February’’ that absolutely has a kick. It is not that Spread Eagle reaches a huge level on this album but on the other hand the material and performances are quite consistent. Whether that will be enough to get Spread Eagle noticed this time is the question. They might have done gigs during the years but their last record was released in 1993, more than 2 decades ago. That is a very long time between albums, so it looks like that the main market for Spread Eagle will be in the good old USA where there is still room for these kind of groups to make a living.