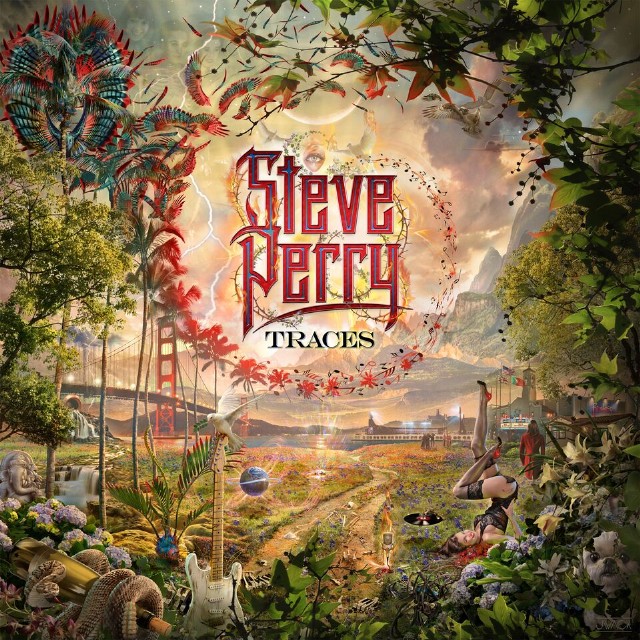 Fans of AOR have waited a few decades for a musical sign of life of now 69 year old master vocalist Steve Perry, the man that took Journey to great musical heights and mega success in the seventies/eighties and nineties. I am sure fans of this genre know how iconic this man still is even after years of hardly being around. His third official solo album has been a long time in the making and is now finally out. So far judging on the very mixed reactions I have seen in the social media I already knew that ‘Traces’ would not be a continuation of Journey classics like ‘Frontiers’, ‘Infinity’, Escape’ or ‘Trial By Fire’ nor would it be like Perry’s earlier solo efforts ‘Street Talk’ and ‘For The Love Of Strange Medicine’. And the ten songs on ‘Traces’ (there is also a USA limited edition with five extra tracks) more or less confirm it. ‘Traces’ is an album that is filled with ballads and pop songs. Don’t get me wrong I really like this CD as Perry is still a great singer as he proves on this record. He still sounds like a nightingale but in comparison with the old days he now avoids the high vocal region. He stays in the middle relying on songs that are carefully crafted and structured. Steve Perry must have had a lot of material to choose from but decided on middle of the road material, soft and polished and just every now and then a snippet reminding us of his old days. I can imagine that a lot of Journey fans will be bitterly disappointed with the direction Steve Perry has chosen on ‘Traces’.  For Steve Perry the Journey period is a bridge that he crossed a long time ago and for him there is no going back (or is there?). So what is the verdict for ‘Traces’? It is a very smooth and soft piece of music that has all the ingredients to do well on the contemporary market. The songs are radio friendly and easy on the ear, the production of the man himself is top notch. But at the end of the day ‘Traces’ is a pop album with just a few reminders of how things were. So I completely understand the mixed emotions and reactions that I have encountered on social media. But on the other hand, have we all been a bit naive in expecting Steve Perry to just revisit his past? The answer to that question lies with you and only with you.