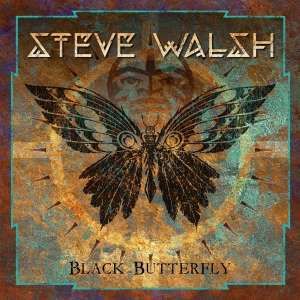 When Swedish composer/guitarist/keyboardist/producer Tommy Denander recorded his latest Radioactive CD ‘F4UR’ a few years ago as usual he used a bunch of guest vocalists for his project and one of them was Steve Walsh who we all know as the man behind Streets and Kansas. Steve sang the song ,,The Piper’’ and around that time discussed with Escape Music boss Khalil Turk the possibility of recording a CD for the label that released the ‘F4UR’ album. Around that time there was also the news that Steve had retired from his band Kansas and the rumour was that he had retired completely from the business. Thank God that has not happened yet. Steve Walsh may not be 18 years old anymore but his singing, his talent, his musicianship is still there after all these years. If you have any doubt about Steve’s musicianship have a listen to ‘Black Butterfly’ and hear for yourself that this man is still one of the very best rock singers in the world. Under guidance of Tommy Denander (guitar/keyboards/production, song writing) and with the help from a bunch of talented other musicians like FM’s Steve Overland (background vocals), drummer Peter Yttergren and bassist Brian Anthony (also responsible for the mixing and mastering of ‘Black Butterfly’) this record leaves nothing to be desired. And then the record company presents another ace in the hole on this CD. A few months ago this web magazine published a review of the Pinnacle Point album ‘Winds Of Change’. On that CD singer/keyboardist Jerome Mazza stole the show with a performance that totally gobsmacked me. He would have been the perfect guy I reminder writing to be the replacement for Steve Walsh in Kansas as their voices have the same majestic sound and colour. Khalil Turk must have thought the same as he got Jerome Mazza involved with this CD singing on several tracks and doing a duet with Steve. Add to this the amazing cover design by designer Eric Philippe and there you have it: a melodic rock CD that has it all, a perfect sound, excellent compositions (including ,,The Piper’’), exquisite singing by Walsh and Mazza plus the characteristic style of Tommy Denander’s guitar blasting all over the album (for instance ,,Warsaw’’). What more do you want people? It does not get much better than this!