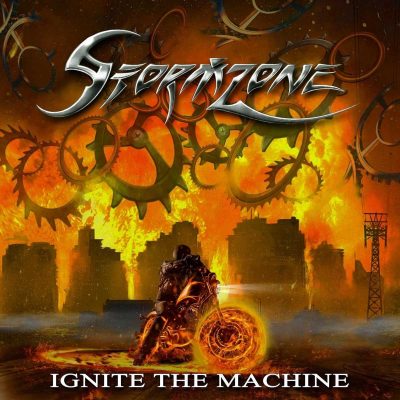 September 1, 2020 by Michel van de Moosdijk - More about our team

Stormzone hailing from Northern Ireland have just released their seventh CD and their first for their new record company Metalapolis. The two driving forces behind this band are vocalist John ‘Harv’ Harbinson and guitarist/producer Steve Moore who are accompanied by second guitarist Dave Shields, bass player Graham McNulty and skin beater Davy Bates. The twelve songs on ‘Ignite The Machine’ are a mix between traditional heavy metal (more eighties influenced) and power metal but unfortunately for us the lads never really manage to ignite the machine and get completely into gear let alone overdrive. It gets and stays stuck in mostly predictable songs and mediocre performances. For one reason or another this record just does not get going and the not so exciting production and cliché performances just do not invite the listener to give this record another real look. This has been done over and over again. The fact that the band has managed seven albums already says a lot about the stamina and the dedication of the group. There can be no doubt about their willingness to try but there can also be no doubt about the fact that this album is as good as dead on arrival. In this genre there are just a lot of bands that perform better then Stormzone do on this album. Sorry to be this harsh but it is what it is.