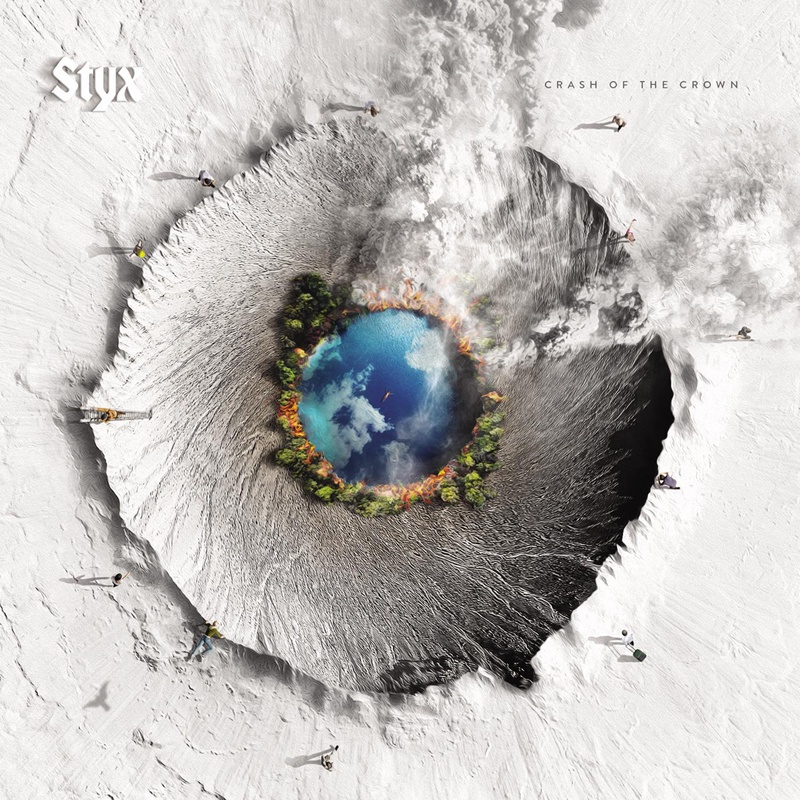 I admit I am always high on adrenaline for a new release from any of my favourite bands/artists. Styx’ `Crash Of The Crown’ is no exception. The follow up to the highly acclaimed concept album `The Mission’, that instantaneously put Styx back on the top ranks of the classic rock lists, is certainly an album to look forward to. `The Mission’, released in 2017, fused the band’s pompous classic sound with a modern conquering approach, mounted to the foundation of its daring enterprise concept. Styx sounded rejuvenated and its regeneration of the key elements from their extensive back catalogue took shape in an energetic poise of grandeur and positive reverie. ‘Crash Of The Crown’ picks up exactly where `The Mission’ left off, and goes beyond.

,,The Fight Of Our Lives” instantly warps us into the hot seat for an energy packed, no holds barred, Styx rollercoaster ride. Multi layered vocals and its powerful choir-pumped choruses emboss the typical Styx signature in gold. Short-lived its positive vibed energy takes us into the opening riff of ,,A Monster”. Musically it is stowed with action and finesse with tons of bass and key interaction pulling it forward. The Beatles-esque mid-section is meandering in beauty and the vocal interaction of Young, Philips, Gowan and Shaw is simply astonishing. It is at that very moment the listener is sucked into `Crash Of The Crown’ tremendous punch and harmonies. It all fuses perfectly. ,,Reveries” has the subtle acoustic drive underneath a hovering keyboard swirl while the song revolves around Shaw’s pristine voice. Picking up pace on its chorus with an uplifting vibe marking the album. The guitar solo is adding posture to the bombastic outpour before plunging into the more melancholic ,,Hold Back The Darkness”. Though not proclaimed a concept album, the red line of rise and fall of mankind reflects in the song’s tenure on `CotC’. Lawrence Gowan takes the helm in this DeYoung reminiscent orchestral track. Throbbing bass and hovering riffs and solos propel it gracefully eluding drama. The song flows into the Churchill sound fragment of ,,Save us from Ourselves” which, for the first time on record, features lead vocals from James Young, Lawrence Gowan and Tommy Shaw. Rocking out tremendously the song fires on all classic rock engines and in merely 3 minutes makes you add the repeat button to find out what has just hit you.
This actually is one of the strongholds of `CotC’; its short pointy songs. Most clocks under the 4-minute mark but are as mature and driven as any of the epic tracks from the past. Keyboard swirls pick up the forceful thrive of its predecessor with James’ raspy raw vocals kicking up the dirt on the album’s title track. ,,Crash Of The Crown’’ also bridges towards ,,The Mission” with a jazzy section and dramatic orchestration reminiscent to ol’ days Queen records. Styx don’t appear shy to reveal their influences on the album, with their most dominant influence likely being their back catalogue. ,,Our Wonderful Lives” and the progressive infused ,,Sound The Alarm” with it’s the Who tinging mid-section are simply jaw dropping with uplifting greatness harkening back to hit sensitive songs such as ,,Sing For The Day”. Both heralding spirit and grace in triumphant evading orchestrated sections.

,,Common Ground” returns to the pompous format with ear mingling choirs and vocals before the band goes rocking out ,,Long Live The King” that is propelled by its polyrhythmic drum patterns displaying Suchermann’s tremendous skills. The silent engine combusts frequently on the Evankovich penned track, which adds a different approach to the classical benchmark. The song has a more transparent structure without lacking the band’s signature grace and style. Tommy radiates energy. The song opens towards the last chop of the album that packs some eye-popping tunes like the lush semi rocker ,,Coming Out The Other Side” and the full frontal barnstormer ,,To Those” that packs the Styx power and bombast. Anger laden vocals and over the top driven musicianship unleash a tsunami of emotions and power. Glorious chants over swirling keys, throbbing bass and intense riffs display the band’s pristine power. It takes you on edge. The album dies out with a high during the symphonic short interlude ,,Another Farewell” (quirky subtitled “The Calm before the Stream”) and ,,Stream” being the album’s closing track. Psychedelic bending strings and hypnotizing instrumentation blend with Shaw’s charismatic vocal delivery. Repetitively chanting “..Staring into Space” is again bridges to their magnum opus `The Mission’, making `Crash Of `the Crown’ go full circle on the band’s history, injecting their multi-platinum catalogue and modern day era with two landmark releases in little less than 4 years.

Styx’ `Crash Of The Crown’ displays a band that performs with joy while bearing the marksmanship of the past. Rejuvenated and with impeccable skills the album pulls forward and leaves you behind baffled after first spin. The flow of the album is exquisite with pointy songs putting a smile on your face, or making you grasp for air. Transcending in glorious moments the music sparks tremendous action and poise, well captured by Will Evankovich’s organic and open production. Evankovich, providing counter-balance to Shaw’s song writing since the Shaw/Blades album in 2007, also dominantly takes position on the record while not affecting the benchmark band sound. It all gels extremely well, making `Crash Of `the Crown’ a sonic chronograph heralding life. They certainly lived up to my expectations and yes… they went beyond expectations. Styx is back with another landmark release!