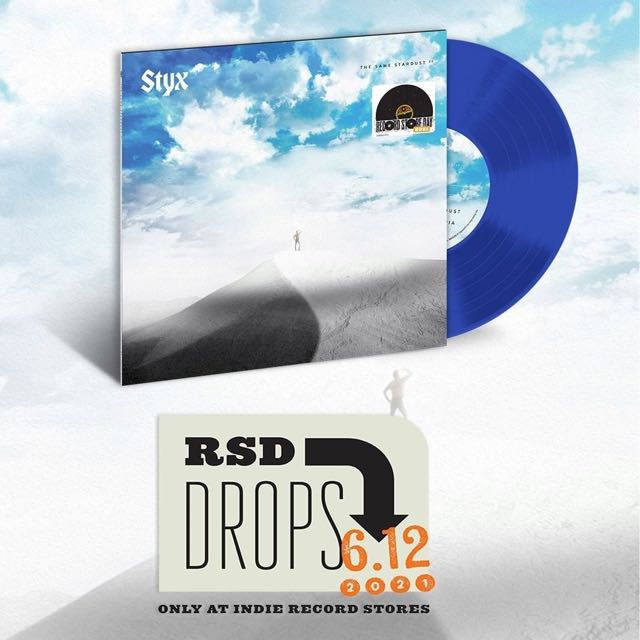 Preceding the new `Crash The Crown’ release, Styx announced a special RSD drop. With Europe (and me) being swept back and forth due to the inconsistency of the announcement, fingers were kept crossed until June 12. The ‘yes and no’ of Europe, included in this special drop eventually seemed pointless as I found myself holding the blue vinyl EP. Two new songs not featured on `Crash The Crown’ and 5 live recordings make it worthwhile. For sure!

Both songs could have easily been featured on the high potent new album. They pack the same swagger and poise; blend the typical ingredients of the band’s long spanning career. The title track is a short driven pompous rock epos with dense choirs and slick melodies. The most striking part of it is the high level of Beatles reminiscent ingredients in its structure and vocal lines/choirs. It just oozes the Liverpudlian finesse and comes across the homage of DeYoung’s `Hello Goodbye’. Less lyrical bits and pieces, but the general, little psychedelic hinges are packed into the pumping thrive of the band. ,,Age Of Entropia” even goes beyond and captures the psychedelic swirling hypnotism and inflicts it with the typical Styx sound of their debuting days. Almost hypnotic the track evolves and again it has a sonic unload of pitches choirs and chorus that nest instantly.

Two songs making the purchase worthwhile as the B-side features the band at their very best: performing live! Amid the classic high potent live crackers ,,Renegade” and ,,Miss America” displaying perfectly timed choir vocals over their impeccable musicianship, Styx shows ,,The Mission” holding up fiercely. ,,Radio Silence”, performed at the Sweden Rock Festival, radiates thrive and melody. Polished but raw. The fine line the band always managed to balance so truthfully. It is as timeless as the before mentioned classics and ,,Man In The Wilderness” that returned to the setlist in the last two decades, after long absence. The track bridges perfectly to both new tracks on this RSD release.

The oddity on the B-side is ,,Mr. Roboto” which, rumour has it, always been twist in the departure of Dennis who devotedly refrained to the song wince his departure. ,,Mr. Roboto” returned to the Styx setlist much to fan’s praise and this version reveals why; It simply is one of those live tracks that wins over audiences. Arena rock firing on all engines. Robust, with slick sing-along sections, powering up constantly, and with an over the top poppy ground feel.

Styx’ Record Store Release `The Same Stardust’ preceded the band’s acclaimed release of `Crash Of The Crown’ and revealed its direction and the band’s intense qualities and song writing skills. It is a perfect addition to their catalogue and the live recording also add to their many live releases. On top, the clear blue vinyl looks simply astonishing. Must have for collectors and fans of the band. All other classic and prog rock devotees can wait for the new tracks to be added to their Spotify catalogue.